I suspect most coaches come up with their own way of having an offensive play caller during games, or had one handed down from a past mentor. I remember my older son’s 8th grade coach didn’t use a caller at all – he would call plays from memory, including formations and motion. Most of the time this lead to nice variety and tendency breaking; sometimes it lead to the QB looking back at him with a blank stare.

There are a few strategies you might use in building a call sheet:

You can also do some combinations of the above, but ultimately it will be about what the play caller most needs to be effective. Some play callers have the offense so well buttoned up in their memory that the situational approach might be better to reduce stress on the coach during times when a quick play call is critical. 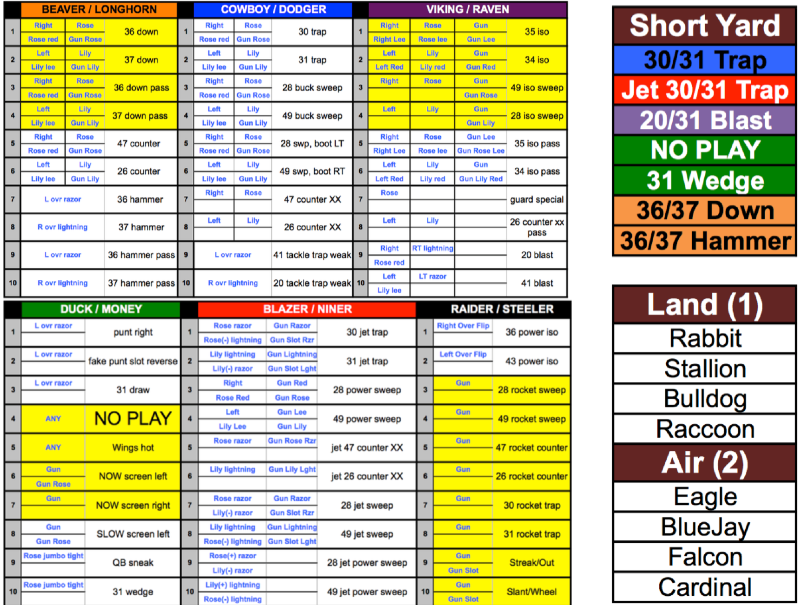 The past two seasons, partly because of our move to a wrist-coach based no-huddle offense, we went to a play caller that mirrored our wrist coaches (see above). The plays are roughly organized by series, and the first three sets of plays (orange / blue / purple) would have been the plays we used for the first third of the season. Included next to each play is a summary of the formation and motion calls we would run.

We would have at least four options for calling each play. Let’s look at 36 Down for an example:

In prior years we also used a hole-based caller like what you see above. Our offensive coordinator moved away from this the last two seasons partly because he knows the offense so well and we hadn’t changed much in years, and partly because he would still need to flip over to the wrist coach caller after looking up the play here. It just wasn’t as efficient. I suspect that if either (1) someone else were doing that translation for him or (2) we weren’t going no huddle, that he would stick to the hole based caller.

You’ll also see on the first caller above that we did have a short yardage situational reminder.