Update on June 8, 2016 – Want to learn how to install and run the Pistol Wing-T? Pistol Wing-T for Youth Football. I go deep into the Rocket series in this book.

A coach asked me last month:

I am a devoted Wing-T guy and would love to learn as much as I can about the Rocket sweep and it's complementary plays.

Rocket Sweep and its complements haven't been a core part of my Wing-T installation for a while, same with local power house Sherwood High. Before last season I did a lot of study on Wing-T extensions and hybrid looks and was particularly inspired by a long face to face chat I had with former Carnegie Mellon offensive coordinator Rich Erdelyi. My older son Jacob is a student athlete at CMU, though he opted to throw javelin rather than continue his football career. I took advantage of some spare time when I dropped him off at the start of his freshman year in fall 2013 to bend Rich's ear (actually I wanted him to bend my ear) and he was kind enough to chalk talk for nearly 90 minutes and share a number of his clinic DVDs.

The series that caught my eye was his Pistol Series, which has Rocket Sweep as a core element. My co-coaches and I agreed to try to get some of this installed if we had the luxury, and the 2014 season was our first attempt.

First a side note on how and why we decided to add this in last season. Two key reasons:

I'm not going to write out the entire series in a blog post here, but perhaps I'll do an add-on playbook with video if there is interest. I'll cover the foundation of the series though.

It didn't take long to install the C/QB snap. I'm not sure we ever had a bad snap in the 2 or 3 games we ran pistol. 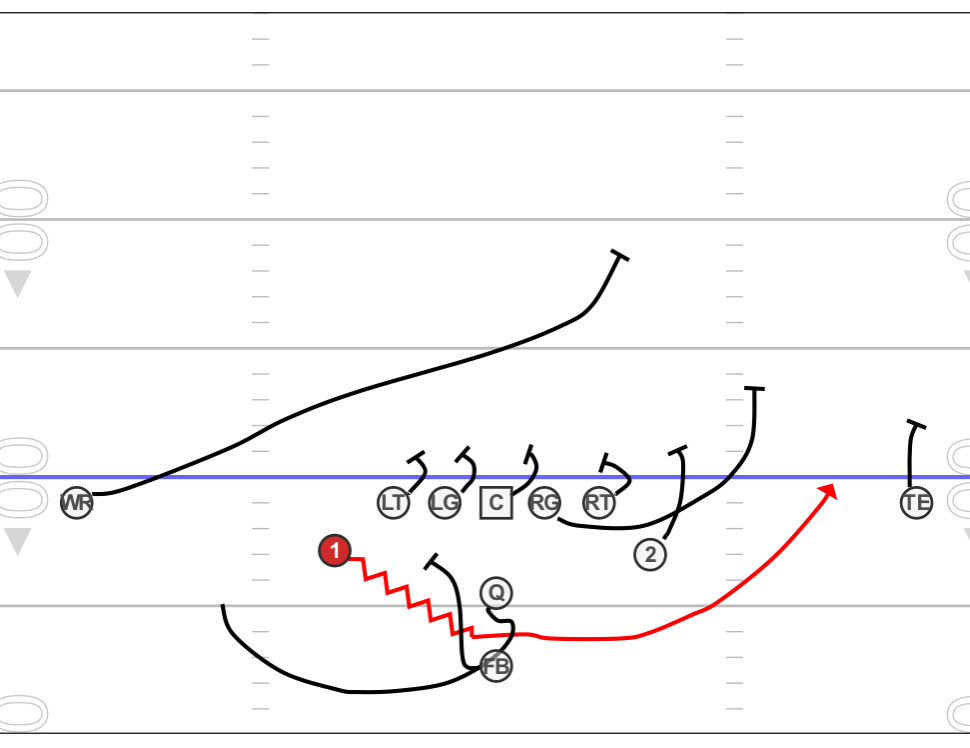 The backside WB goes in full speed rocket motion on QB signal. He aims for a spot about 1 foot in front of the fullback, then flattens out. Is goal is to catch the ball in the C gap or wider. I won't cover every blocking assignment here but will call out a few key ones:

The key teaching point we had to work on was the QB to FB pitch timing. This is something you can work on repeatedly in small group practice time. You can have the QBs play the snapper as that is a key part of the timing. I covered some of this in my National Wing-T Clinic notes.

This turned out to be our money play. With full flow rocket motion, we fake the pitch and give the ball to the other WB who follows the back-side tackle who is pulling. The rest of the line blocks down away from the play.

The FB has the key block here and will kick out the first man he sees outside the frontside tackle down block, usually the defensive end. The backside tackle as I mentioned is pulling and will lead block through the hole. The wingback ball carrier takes a drop step with his inside foot, aims for the QB toes, and takes the inside handoff. He turns downfield quickly to follow the tackle.

Much of the Wing-T playbook is open from these formations, but a few work better than others. Here's what we ran:

One advantage of running the pistol is your QB is in great position for a normal 3 step drop passing game. We ran a series of quick and slow screens out of this, plus some simple mirrored routes with the split ends and wing backs. We generally kept the FB home for protection, though the slow screen was a dump to the FB after faking protection. I'll share more on the passing game in a future post.