I’ve been running no huddle with my youth teams for the past two years with success. We mimic what Sherwood High School does so I have to give credit to offensive coordinator Jason Travnicek for this approach. While we are a Wing-T team, what I’m going to talk about here is applicable to any youth football team.

There are many reasons why you might want to run no huddle, and I need to be very clear about why we chose to do it and what benefits it brought. Also, we use a particular approach that has significant limitations but can also solve some serious issues (and open doors) and I’ll call out those trade-offs.

So what are some reasons to run no huddle with your youth football team?

About five years the high school had a running back that had difficulty remembering play direction and assignments based on the call in the huddle. In classic football-coach-as-innovator style, Jason designed a system that put the play and position assignment right on the wrist coach while still allowing for flexibility in how the play would be called. 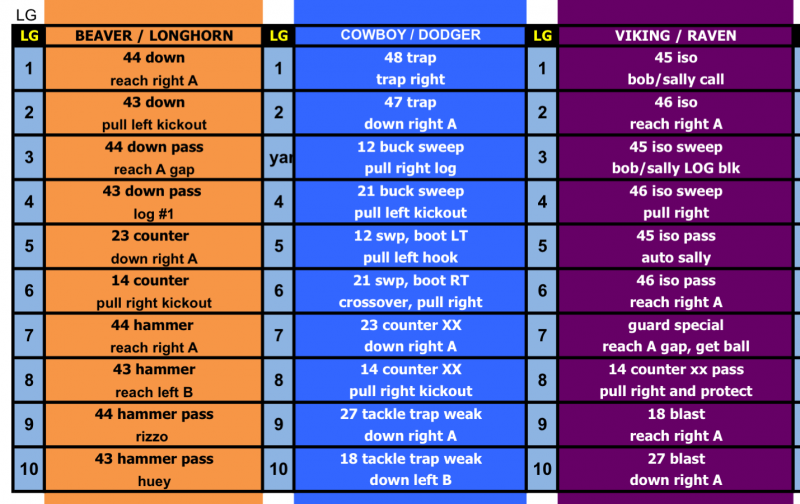 Above you see one of the wrist coach panels from my prior season for the left guard. If we call “Beaver 1”, “Longhorn 1”, or “Orange 1” the play will be 44 Down and the LG assignment is to “reach right A”. This means he executes a reach block to the right A gap (duh). If we call “Beaver 2” we are running the down play to the left and he now will pull (actually trap) left and kick out.

For my teams with 12–13 year olds, we would typically start the first half of the season with just one of these panels, adding a second panel to expand our playbook about midway through. This year was a bit different as we had a good idea from the start what our full playbook would be so I went ahead and put in both panels from the start.

It doesn’t take a genius to see how this can dramatically reduce the time to install the base plays as well as variations. We even include instructions for the TE for when he is play-side vs. back-side (e.g., we will run sweep plays to the TE or WR side) so he has less to remember.

How We Call Plays

Our approach to calling plays from the sideline was as follows:

This is a weak-side (because in Lily the TE is on the left, razor motion puts the left wingback in jet motion to the right) jet sweep play on 1.

Downside of this System

This system isn’t perfect and has some downsides:

In my next post I’m going to talk about an alternative approach to this no-huddle system which takes away these limitations but also loses the teaching benefits.