Starting this coming Sunday I’m running a private clinic for local 8th graders, most of whom played in our youth program last year. The idea is to have a spring non-contact football opportunity for kids moving into the high school program as a transition. Given how many teams in greater Portland are running the Wing-T now, we will likely open this up to a broader audience next year.

I don’t have much to say about the clinic yet because we haven’t started, but I thought it could be helpful to share details on how we are organizing it. I’ll report back a few times during the next 6 weeks to update you on how things are going.

We are calling the clinic “Wing-T Academy” and are charging $100 for 5 sessions of 2 hours each, happening on most Sundays from now until the first Sunday in June. We are skipping Mother’s Day and Memorial Day weekends. We have expenses including field rental, insurance, equipment, and T-shirts. I made it clear in the invitation to the Academy that if the fee is a problem we will waive it.

We are using each week to review fundamentals related to each of our core Wing-T series. If you have my Wing-T playbook these will look very familiar:

As you can see this is an offense-only clinic. The progression of the series allow us to incrementally introduce key concepts and build on them throughout the Academy. We surveyed each player (and parents) for a position preference: quarterback, running back, and offensive line. We are going with each player’s first choice, and right now we have 4 quarterbacks, 7 offensive linemen, and 18 running backs. There are a few linemen from the past that are interested in giving it a go as a running back. 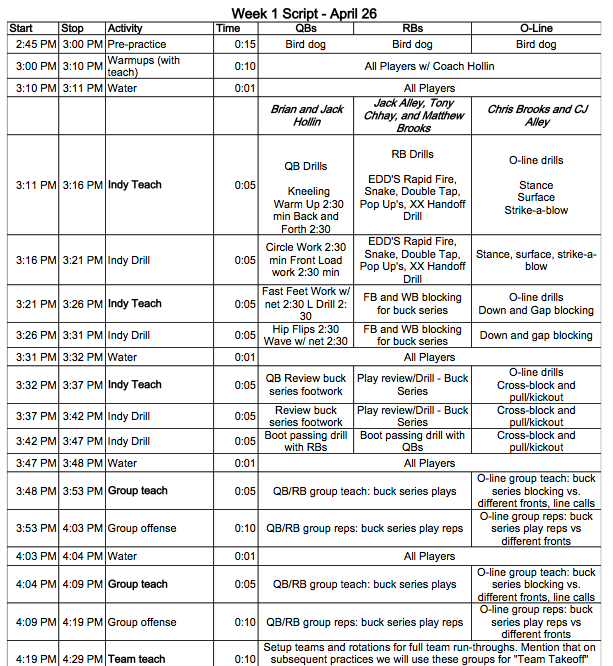 I have a detailed plan for the first week, and I’ll tweak accordingly for the following weeks. Some key attributes of the plan are:

I plan to film a lot of the Academy so will be sharing examples of all of this in the coming weeks.