Gerry Gallagher closed out the conference with a deep dive into the Belly XB (ISO) play along with the Belly Keep Pass (our ISO Pass). I love Gerry’s DVD Training The Wing-T Quarterback

Let’s talk some terminology here. My heritage is with the Sherwood High School and Youth football programs, which has its own flavor for the Wing-T. Our “ISO” series is really a sub-category of the classic Delaware Wing-T Belly series. This series revolves around a weak-side (split-end or wide receiver side) isolation play to the fullback. For the past five years we’ve also run the ISO sweep off this play.

The other half of the Belly series is the Down play, which is my favorite play to start with for youth football.

One difference in Gerry’s talk was that he hasn’t really embraced the Belly / ISO sweep so he was very likely to do other things with the back-side wing. For example, if running belly to the left side, he might put the right WB in jet motion to the left and have him kickout 1st free man at the flank. 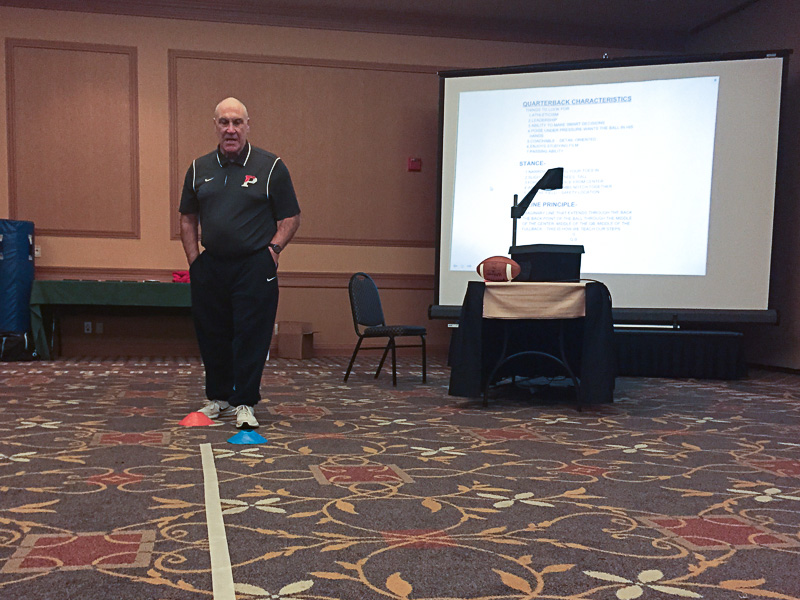 Why run the belly (ISO) play?

Gerry stressed that there are two distinct belly paths:

This is the Wing-T isolation play. Key concepts:

I won’t repeat the backfield footwork here - it is the same as I covered in the Dave McDonald post. When the blocking back is in the wingback position, they have him take a pull step then work to the tail of the tackle.

Their normal route package on ISO pass to the left is to have the LH arrow to the flat. His rule is to aim for the next five yard stripe at the sideline. The RH logs and protects the QB.

The FB will block a LB if he sees blitz, otherwise he runs out to 6 yards and slides to left.

The TE bends to center at 6 yards then streaks.

The QB does not ride the fake on the Belly pass. His first read is flat coverage - if the defender is backing up, he will quickly hit the arrow route. His next read is to the deep route and if that isn’t there he can run or look for the FB.

Variants on this pass play: