Chuck Johnson has been the head coach at Ridgewood HS in NJ for 37 years. He ran an outstanding clinic on practice organization. Chuck is “old school” and doesn’t use computers much, still preferring to hand write his practice plans each day.

Chuck asserts that football is comprised of a diversity of positions, assignments, and skills; therefore, practice must be organized accordingly. He stresses that on every single rep a coach says something to one of the kids. It can be positive feedback, a compliment, a correction. Say it quick, get in and get out. His approach is to practice with game speed (scout team, team offense, etc.). They organize practices around a small set of plays or objectives for the day. For example, on Monday they might have the offensive line focus on run blocking, on Tuesday they focus on pass protection. 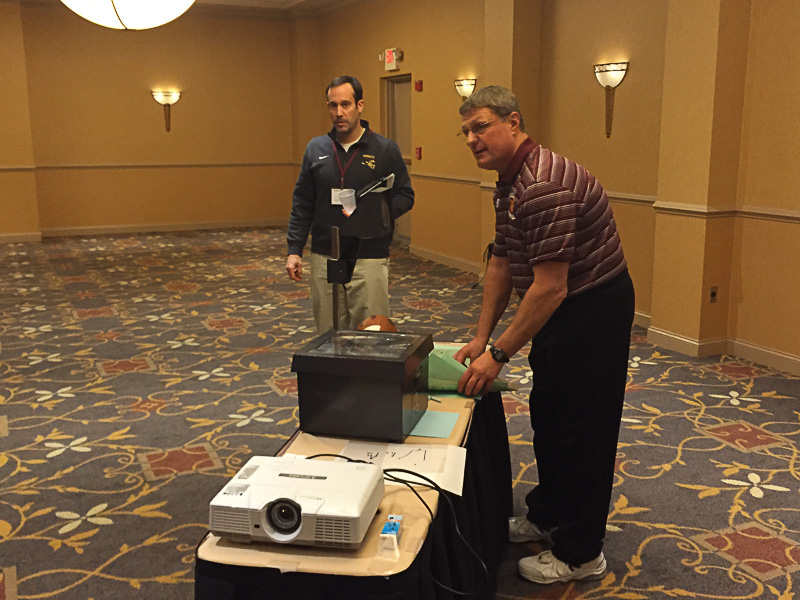 Single Most Important Thing You Can Do As a Coach

“Coaching” is putting each player in his own game situation as many times as possible, as many different ways as possible.

Number One Yardstick by Which Coaches Are Evaluated

On offense, they divide up as:

Team Period – all parts together

Other Notes on Practice

Their Saturday routine is as follows:

How Chuck Does Motion and Cadence (and the CLAP drill)

This was one of the more interesting parts of Chuck’s talk. Chuck believes that the more you can take off the shoulders of the QB the better given how much responsibility he already has. Therefore a while ago he decided to make the backs responsible for initiating and timing their own motion. There are no foot or hand signals to start motion.

Their cadence has two parts:

So if the count is on two, the whole cadence might be “Red 5, Red 5, Ready, Set, Go!…Go!”. The backs have to know when to start their motion based on the rhythmic part of the cadence. They also have a “freeze” call which allows them to start their motion but have no play / snap in effect, followed by a check-with-me.

How do they practice this and get players used to the cadence? It starts with the clap drill. At the end of opening warmups, which takes about 6 minutes, all players sprint to coaches where the defensive coordinator does five “up/down/hit-it” calls where they drop down, get up, and sprint to a ball. This is meant to get their attention and get them into the right mindset.

The players then all come down on their left knee with the quarterbacks in front facing them. Starting with QB1, each QB announces a snap count then proceeds to call a cadence. On “ready”, every player’s arms and hands go up in front like he’s getting ready to clap. Each player then claps on the proper cadence count GO. It should sound like a single clap.

Each successive backup QB then follows on, with his job being to sound like and have the same cadence rhythm as QB1 – this is partly how they can get consistent timing with their motion.

If the coaches feel that the team is not engaged, is lackadaisical, they will return to the “up/down/hit-it” to regain focus.

Obviously they spend a lot of time in their group work with QBs and backs working on motion timing.