Dave had a few key talking points for Wing-T quarterbacks: 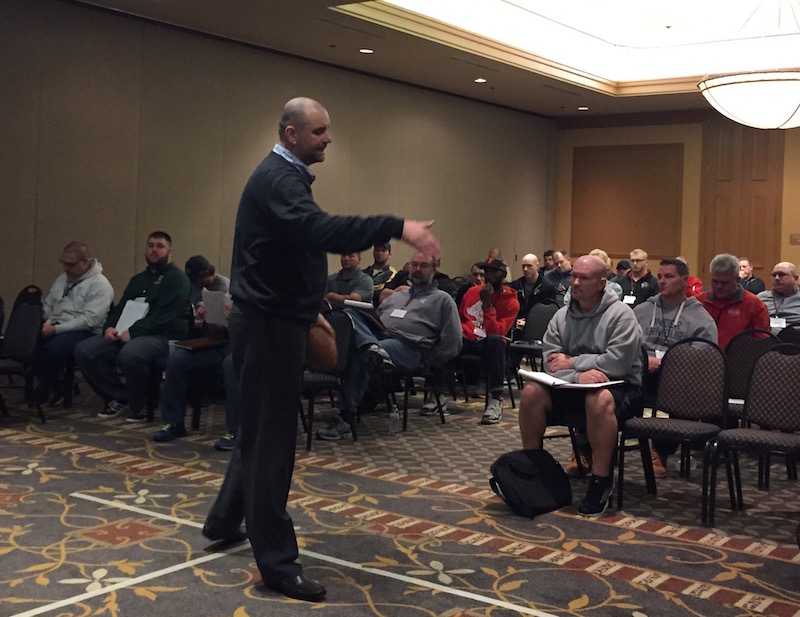 I’ve historically taught the QB and FB to use different midline relationships on the Buck series depending on the play. However, a key point I heard across multiple sessions: most coaches I talked to have moved away from alternate midline footwork based on the specific play within a series. For example, they have the QB execute exactly the same footwork for all plays in the Buck series. The result, in the case of Buck series, is that the QB is slightly off midline for all the plays, and the FB is partly over the midline for all the plays. This will make more sense when I talk through the footwork and bird dog approach they use.

While some coaches have the QB swing wide open with his back into playside A gap, Dave has had success using basically the same footwork as buck sweep. Key points:

They snap a bit later to give WB time to clear and return to full depth footwork like buck sweep (meaning, the quarterback will take full first pivot step with depth). In this regard the footwork is identical to buck trap except there’s no halfback fake afterwards.

Of course in their terminology this is “Belly Cross-Block” (Belly XB), but this is the same as my ISO play with “Sally block” (“switch” or cross-block) call. I also attended Gerry Gallagher’s Belly XB talk so I’ll have more on this in a later post.

Note they always have the WB / HB blocking through the hole, even on cross-block and even if he is starting from the WB position.

The fullback footwork with a Sally cross-block:

When it is an on block (BOB call), it is really a quick belly play. We make a line call for this when there is nobody in or shading inside of the playside B gap. The fullback does the lead step, crossover, then goes. The halfback must be quick through the hole or he will get trampled by the fullback.

In contrast to the ISO play, the Down play does not have the QB getting depth in the backfield. The quarterback footwork is: