Coach Rick Stewart did a session Friday night at the National Wing-T Clinic on no huddle, tempo, and run-pass options (RPOs). The bulk of the talk was on tempo and huddle concerns, with a bit on RPO towards the end. 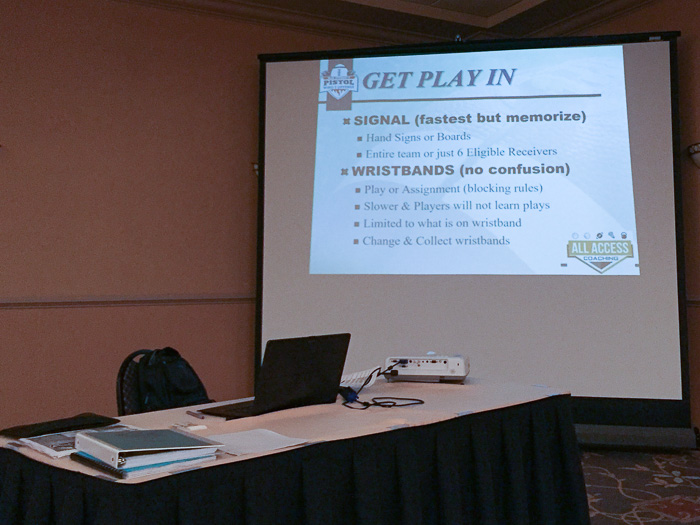 Rick runs a mix of huddle and no huddle with his offense, probably being in huddle about 50%–65% of the time. He has evaluated and tried a number of techniques for getting the play into his offense and settled on verbal and hand signals that go to the entire team. For simpler plays and formations, the signal stands on its own and signifies play, direction, motion, and formation. If a play requires 5 or more words he will put it on a QB wrist coach and have the team huddle. Any given week he may have 10–20 plays on the wrist band, and because he only needs a few it is easy to change this out every week. They just yell out the number to get in the play.

For deception, they will sometimes have graphical cards that they hold up just as a dummy.

The coach calling the play tells it verbally to another coach or player (he has the WR coach and frosh coach standing next to him) and they will both signal in, with only one of them being “hot”. You might make it easier for players to find the right coach by having a certain color jacket or putting a hat on backwards.

Coach Stewart recommends getting the players involved in deciding the hand signals.

Rick primarily runs a Pistol Wing-T and puts his QB at four yards behind the line of scrimmage with his back to the line for his huddle. The center is in the middle of the huddle and in front line, with the TE directly behind him. This makes it easier for the TE to go either left or right. Rick also stacks the tackles behind the guards (who are next to center) as this makes it easier for them to overload on one side for his unbalanced formations.

The QB first says “eyes up” then says the play to the group on his left (the RG, FB, RT, and RH) - at this point the C and WR leave the huddle. QB repeats the call to the other side, says “Ready… Let’s” and whole teams breaks with “Score!” and claps, sprinting to the line.

Because the QB was at 4 yards, he can just pivot around and step forward one step to be at his 3 yard alignment. They will try to snap the ball within 4 seconds.

After each play the coach will give a “huddle” or “no huddle” signal, such as:

Rick’s approach is to keep no huddle simple, and I’ll try to convey that simplicity here. There are four different ways a play will get relayed in when going no huddle:

There’s also a fifth signal that can come in when in no huddle, and this would be a formation (with optional motion) followed by a “look” signal. This tells the team to line up, go through a snap count, but not run a play. Instead they will freeze, look to sideline for further instruction.

This is where you are likely to have the most personal / team variation. I’ll briefly walk you through Rick’s approach. They will come up with names for each play, but with groups or categories that make them easier to remember. For example:

For formations, consider using a default formation that the team can always go to without any signal (like the classic 100/900/right/left, or red/blue/rose/lily) then adjust from there. If you run both halfback and wing sets, you can have the traditional 100/Right formation be your default, but move the HB to the WB position by making a wing with your arm against your ribcage.

Rick runs everything no huddle and signalled from the side during practice. It is easier to slow down when you need to, but hard to go faster if you aren’t training that way. At anytime during practice they might scream NASCAR to quickly jump into their 4 best play routine.

Coach Stewart admittedly is just starting to implement RPO in the coming season, and my take was that he will use concepts similar to what Bruce Cobleigh often talks about. He is likely to run RPOs off Belly and the inside veer (Baylor) plays.

He likes having the QB in the Pistol formation with his eyes forward for both RPO and the option game he likes to run.

I agree with this – running a QB under center will make it more difficult to do any sort of real option game, and you might find yourself trading away too much practice time. What you give up in the Pistol look is QB deception as he will rarely have his back to the defense for the proximity fakes.

I really liked this talk, but for reasons I didn’t expect. I think Rick has put together a great tempo and no huddle approach that is an adaptable framework that you can customize quite a bit. I’m working with my other coaches right now on an approach to tailoring this implementation for youth football in the coming season. You can learn more about his approach to no huddle and tempo over at his website.