Rick Stewart conducted several sessions on the opening night of the 2016 National Wing-T Clinic, starting with how he teaches quarterbacks to read unblocked defenders in his Pistol Wing-T. This is one reason Rick runs the Wing-T from the Pistol formation: it gives the QB more visibility pre- and post-snap to make his reads, including run-pass option (RPO) reads which I’ll cover in a future article. 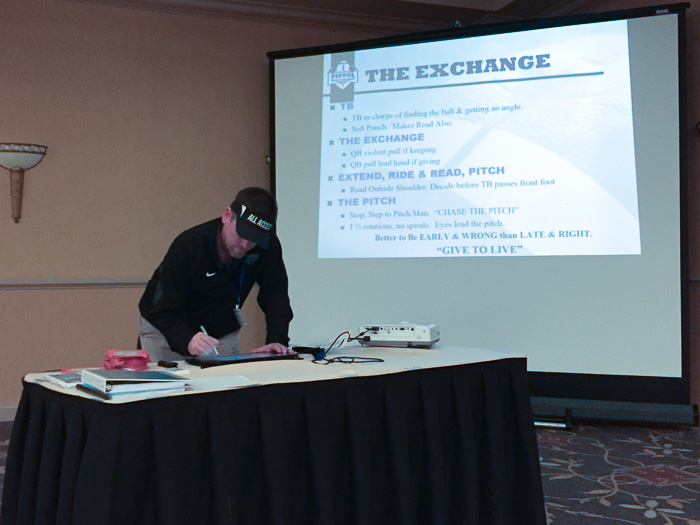 Here are Rick’s rules for alignment:

In most cases from the Pistol formation the quarterback will not be reverse pivoting and hence not hiding the ball with his back. This is a tradeoff to consider. Because he wants the QB reading on most run plays, it is essential to keep his shoulders and eyes forward for the reads.

The defender that the QB will read depends on the play called:

Rick made a point about his QB footwork on Belly: when there is a 0 technique nose or a 1 technique to playside, the QB will not shuffle towards the line of scrimmage (LOS) but will instead just open up to place the ball in the FB belly. The center blocks the NG where he wants to go in this case, allowing the FB a cutback lane back across the midline if the NG slants into playside.

Otherwise, the QB is shuffling back into the LOS as he rides the ball and gets his eyes to the OLB. It is the FB job to get to the ball. The option off the Belly play is Belly Keep (if the OLB squeezes) but Rick says you could also do an RPO off this.

The QB footwork is open pivot on the playside foot (so right foot for Down going to right), crossover the other foot, then plant the playside foot and ride into the LOS. Rick doesn’t call the Down Option play any more and instead has the QB read the OLB – the same player that would be kicked out by the playside guard on Down. If this defender is squeezing inside the kickout block, the QB keeps and can option pitch with the backside wingback.

From the Pistol, Rick has the jet motion back go in front of the QB. This allows the QB to keep visibility up field where he will read the ILB. The QB will shuffle laterally with the wing as long as possible while the TB fill for the pulling playside guard. If the ILB scrapes / flows with the jet motion, the QB keeps and runs off the C block on the NG.

Rick will always run Midline at the 3-technique who is the optioned defender, and he calls Midline “Army” as it is the A gap option. He will not run Midline vs. an odd front. He will double team the first guy inside the A gap (so the center and guard on side he is shaded), and option the first defender outside A gap. The QB makes a single shuffle to LOS on Army.

The Inside Veer is called “Baylor” (B gap) and Rick will run this against any front except if there’s a 2 or 3 technique on playside. They option the first defender B gap and outside. The QB will shuffle twice to LOS on Baylor.

Finally, the Outside Veer is “Cal”. The FB has the same aim line as he would on Down (to the inside foot of the TE).

Talking points on all the option plays:

If you want to learn more about Coach Stewart’s Pistol Wing-T, check out his full system at his web site.