Coach Glen McNew ran a very interesting session at the National Wing-T Clinic in 2016 on practice planning and game preparation, specifically focused on the Wing-T. He is a legendary high school coach in West Virginia. 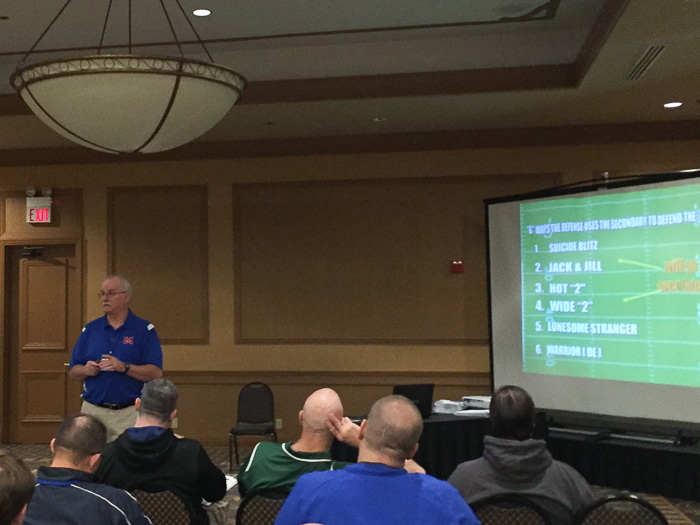 Glen started with an admonishment: choose your discipline of Wing-T and stick to it. Don’t dabble in more than 1 or 2 or you will lose focus and practice time. His key Wing-T disciplines include:

Coach McNew holds a practice every Saturday morning at 8am after the Friday night game, and if a player is a minute late he will not start the next game. Players that are injured get treated by trainer or referred on, and players will do basic running and stretching, bird dog blocking techniques, and watch some game film from the prior night.

His teams practice in shorts all the time. Practice pants cost time and money and he doesn’t see the added benefit. It also is consistent with their approach to contact management.

His teams do not watch opponent game film together as a team - this will be done in position specific groups with focus. He does test his players each week.

A normal weekday practice is 2 to 2.5 hours. Structure is:

On Thursdays before the game they will go no huddle, with plays called from sideline just like in game, both offense and defense.

Examples of Their Indy Period

Glen then went into a detailed example of how he approaches game planning. The first question he asks is How are they defending D gap? He likes to work outside then inside, as he believes attacking the flank is a key component of the Wing-T offense. His D gap plays include:

He relies on the Belly and Down sweep plays as a no-motion alternative flank play. I haven’t looked at his film, but this implies that he might run a lot from a double wing set.

Coach McNew commented “I’m gonna run buck sweep till the cows come home,” which may seem like over dedication to a single play. The truth is he is invested in the buck series and has an intense focus on alternate formation looks and blocking schemes to ensure that he can make this play work.

He always reaches his C to playside when running buck sweep, filling behind with the FB on the fake guard trap. He will spread the formation out if the defense puts 9 or 10 in the box, but still run buck sweep. He also utilizes trades (flipping TE), switches (such as tackle over), and flipping backfield.

If a stud defensive end is shutting down buck sweep (usually because the WB cannot block him), run down or power at him, kicking him out with a tighter trap from the guard or FB. Then when he starts to squeeze, go back to running buck sweep.

Glen spent a lot of time on a sample analysis of defensive secondaries vs. the Wing-T, sharing a few things defenses will do to disrupt the run game along with counters.

Overall this was a great talk, and underscored a theme I’m hearing from many coaches: run fewer plays, but work on wrinkles to make the plays you do run perform better. Additionally, once in the season practice them against the defense you will see and account for likely variations.