If you haven’t already read my article on Wing-T offensive line basics, start there.

I thought I’d share my routine drills for the offensive line (aka, Every Day Drills or EDDs) that focuses on stance, steps, and blocking fundamentals for the Wing-T offensive linemen. Drills 1, 2, and 3 are appropriate for all levels and experience and can also be used for pre-game warm-up. Drill 4 (Cross Block) is appropriate for all linemen but especially the guards and centers to ensure that the fullback trap play can be executed properly. The cross block is also used in the Belly series Down and ISO plays.

These drills assume the linemen have a solid grasp of first step mechanics for each of the basic line steps (power, reach, flat, bucket). Set up four bags parallel to each other, each about 2 yards apart. Have a grid line, cones, or hose about 1 yard off the end of the bags. 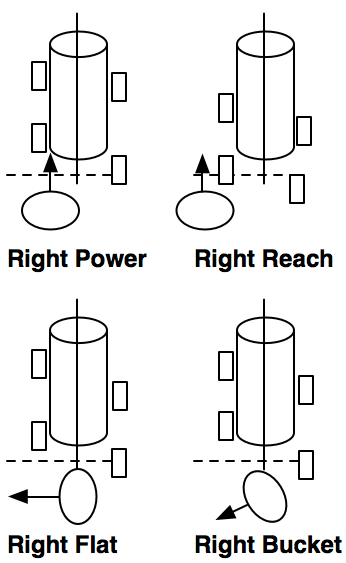 The purpose of these drills is to teach the linemen to be able to move out of their stance. Focus on the concept of a wide base. In all of the steps, the lineman must come off the ball with a wide base or “duck” demeanor. Line up four at a time with their stance at the line in front of the bags. Go as deep as you need to run all of the linemen through the drill.

The lineman offsets in a three-point stance one half-man to the side so that the foot the player is stepping with is down the middle of the bag. The lineman then explodes out of the stance and sprints as fast as possible in a forced duck sprint over the bag. As you teach this drill you can have the first two steps be on command, and begin the sprint on the third step. Complete a full sequence with right and left power. Commands are “Power right on sound, down, set.”

Same as power step get-off but have the lineman offset one whole man to the side so that the foot the player is stepping with is at the corner of the bag. The player can also turn their body about 30 degrees away from the bag. Repeat with right and left reach. “Reach right on sound, down, set!”

Linemen align themselves with their feet parallel to the bag, behind the bag in a three-point stance. Players must rip the corresponding elbow through the hip. Have a flat back as they explode from the stance then straddle the bag. The arrow in the diagram shows which way the player is facing at the start of the drill. “Flat right on sound, down, set!”

Linemen align themselves with their feet approximately parallel to the bag, but with their backs about 30 degrees turned towards the bag. The arrow in the diagram shows that the player almost has his back to the bag when starting the drill. “Bucket right on sound, down, set!”

From the same position relative to bags, each player begins in a 6 point stance with his laces flat on the ground. The face mask should be six inches from the bag, which should be directly between the knees. On command, explode into the bag displacing it from the line. Finish with eyes to the sky and the elbow high. Squeeze the bag with the shoulder and neck. Keep the hips to the dirt and laces flat, forcing an explosion from the hips. Command is “Strike a blow, right shoulder on sound… set!” 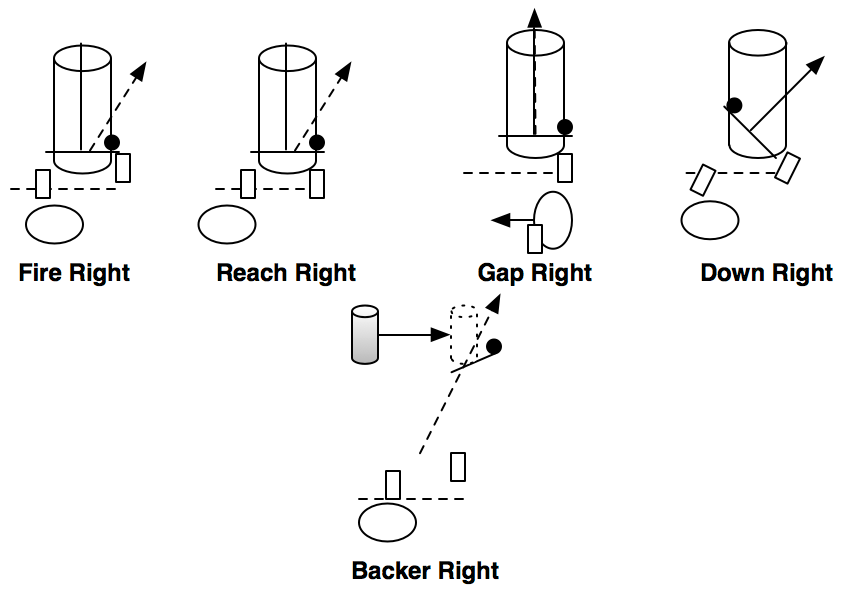 This is where we put together the basic steps and blow from Drills 1 and 2. Continue to reinforce the fundamentals: great first-step get-off, second foot on the ground, violent and correct shoulder contact, driving of the bag with the knees, flat back with eyes up, and a wide base with the bag between the legs.

Use the same set up as prior drills, but have players rotate through holding bags. Stance, alignment, and blocking direction vary for each but the basics are the same. Players can substitute for bags once the basics are grasped. The command is “Fire right, left shoulder block on sound, down, set!” The blocks here are the Individual Blocks from the prior section with the exception of the backer block. The backer block is a log block which should be executed just like the reach block but in space. Move the defender 5 yards off the line and have him flow in the direction of the log block, e.g. the backer moves left if the blocker is flowing right.

This drill can also be performed by pairing up players without bags and having the defender take an athletic linebacker stance. 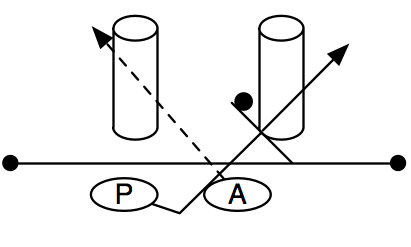 This drill teaches and reinforces the key combination block used for Trap, ISO Sally (switch, aka Belly XB), and Down. Two adjacent linemen begin in a normal split with a heavy bag aligned between the blockers. A second heavy bag is aligned outside the non-pulling (angle blocking) lineman. The angle blocker performs a down or gap block and always goes first. The pulling lineman executes a slight bucket or reach step then pulls and kicks out the outside bag. Repeat both left and right. Command is “Cross block right on sound, down, set!”

You can extend this drill to work on the Down play by adding an extra defender and lineman and having the puller trap across two offensive linemen.