I attended three hours of Paul Connor’s sessions on teaching the Wing-T offensive line. His approach is very similar to what I’ve been using for installation for the last few years. Paul brought an incredible amount of intensity and energy to his talk. 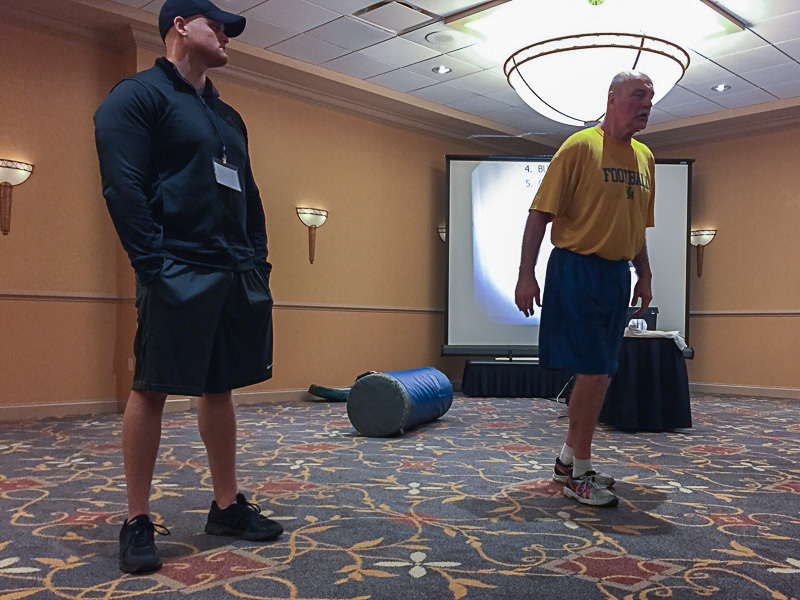 Gap and Down Block

Focus on individual blocks vs. bags in this portion, and Paul likes to start with the gap block (vs. down block because he thinks gap comes into play more often). One key point that I haven’t always followed: keep the bag off the player as far as a defensive lineman would be, likely 1 to 1.5 yards. This is to mimic the actual effective neutral zone based on where players will align. Centers might do this differently and keep the bag closer.

I haven’t typically run this as an individual drill, but I think it makes sense now. Lay a dummy down to simulate the the trap angle. For example, if trapping right the bag would be down at about the lineman’s right foot and 45 degrees away. The defender with bag or shield is at the end of the dummy. Teach the player to stay tight to the dummy to prevent inside spill, using same-shoulder technique. Start with a slight drop step, pointing toe right at defender. Don’t get too deep and teach a “banana course” into defender to drive back and away.

Run two of these stations concurrently: trap right and trap left. After you block, you take the bag from the defender. Defender goes to the end of the line of the other side.

I usually run this and just call it backer block, but Paul teaches this a bit differently. He puts a stand-up dummy right in front of the player and looks for a flat step out then to the backer (holding shield) about 3 yards back from the dummy. Run concurrently with release right and release left stations.

Same as I teach it in my book, but I like this talking point: if the defender won’t let you reach, try to keep running him off the field to the bench. Likewise, run this concurrently with reach right and reach left stations.

Run kickout block right indy by placing a cone just to the right and slightly behind the blocker. Have him throw elbow violently when he opens and gains depth. Teaching point (for down, buck sweep) is to aim for the rear end of the WB. This is also a same shoulder kickout technique.

He teaches a “bad trap” technique when a defensive end is closing hard to make the log look like a cross-block or kickout, but then wrong arm the trap. Otherwise this drill looks just like the kickout drill but with a log technique.

He runs this drill exactly like I do, concurrently with crossblock left and right.

This is when a lineman is going to fold to backer over the next lineman. They stagger two defenders, stacked, over the folding lineman. For a fold right combo, another lineman will be to the right of the folder and will execute a gap or down block left. The folding lineman does a drop step, crossover, tightly seals with the other lineman, then gets over to backer keeping his shoulders square to the LOS.