Mike Johnson is the new head football coach at Logansport High School in Indiana. Previously he was at Pioneer HS where he compiled a 214–78 record. He is the 15th winningest active coach in Indiana.

Coach Johnson is old school Wing-T, and I mean that as a compliment. He learned the Wing-T from Tom Herman, Gerry Gallagher, Denny Creehan, etc. and likes to stick to the fundamentals. He made a strong pitch for the National Wing-T Camp held at Trine in Indiana. 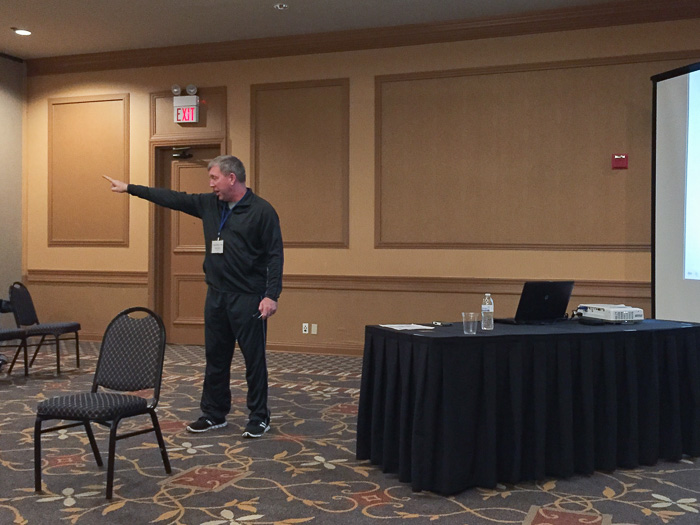 Mike is adamant about the details – coaches and players must pay attention to the little things. He uses two foot splits for guards and tackles, three feet for TE. The TE will also widen if the tackle is uncovered. Also, the tackle and guard will widen if covered without adjusting the TE split. This makes the down block for the TE easier.

Not surprisingly, he gets his line as far off the ball as possible, something I talk about a lot on this site.

Why double TE? Coach Johnson claims that 90% of the Wing-T goes to the TE/WB side, so why no use double TE? I think that’s debatable, but it does show how flexible this offense is if you commit to perfecting whatever approach you take.

Let’s go through some talking points on specific plays.

With a 7-tech DE, have the TE rip under and go straight to backer and have the WB take the DE. Coach Johnson teaches a gap-first technique for the WB and playside TE and tackle, with a goal being to ensure there is no interior penetration. This means they default first to an opposite shoulder blocking technique (e.g., step down with left foot, block with right shoulder and head inside).

One variation he runs is the Buck Sweep Gut, which has the playside guard folding around TE and the backside guard kicking out. This ends up being a slightly more inside play so he has the HB take an inside handoff.

Mike tightens the splits on the line when running rocket sweep, and will run it to both the FB and the HB. Sometimes when running Rocket to the HB he will slide the FB to playside (he calls this a shift to sniffer, I just call this “plus” or “minus”).

Mike teaches the QB to hand the ball off on the line of scrimmage, with the FB executing a crossover step to the inside leg of the TE. The backside linemen all fire-on-backer, similar to what I discussed in a recent article. The WB rule is to always go to the first free man inside on the second level.

With a 7-tech DE, the TE will reduce his split a bit and rip underneath. Mike calls this “making him a 5-tech”.

Coach Johnson covered this in an abbreviated way, covering the play and series similarly to Gerry Gallagher does in his clinics. One interesting point is that they motion a WB to the dive back position on Belly, having him lead with his ISO block from there. This can be a good tendency breaker for teams that flow with motion.

This is a play I’m falling in love with. It always looks better on the white board than in reality, but I’m still eager to try it. This is a naked boot off the Belly Sweep, with the QB getting to 8 yards deep. He drills this by having a coach stand at 9 yards behind the line. The backside TE goes to 12 yards and crosses, while the HB that would normally block belly runs right at linebacker like he’ll block him, but then runs a post. The QB can run this easily, but he often finds the routes open. Obviously the fake on the Belly and Belly Sweep are keys here.

While this was a good talk, I was surprised there wasn’t more emphasis on why he runs with two TE, and how you can leverage that (beyond the obvious of it being a balanced look). Still, it was good base Wing-T chat and he’s been very successful with his approach.