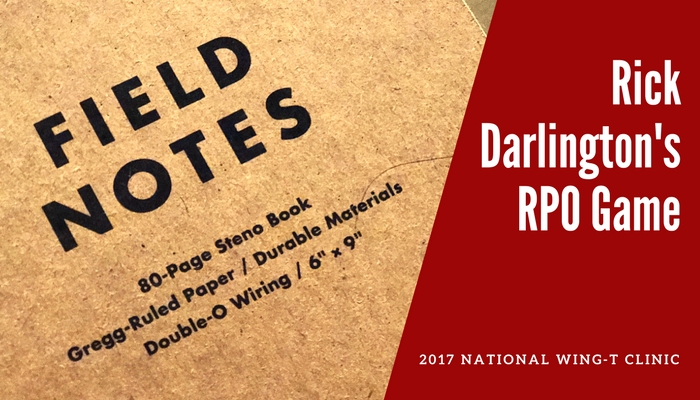 Rick Darlington is the head coach at Apopka High School in Florida, and his record there as 151–39. Rick said he adopted the single wing as he entered a season without a QB – someone said “you should run the single wing!” I guess he had to Google it to find out what it was.

If you like what you see here, make sure you head over to Rick’s site and consider purchasing his materials. He has extensive videos along with voiceovers showing more details of the play diagrams and line calls.

Why Do Run Pass Options?

Rick incorporated the RPO initially for a reason I’ve never heard before: it helped their defense get better during their best-on-best practice. Running just single-wing plays didn’t help their defense enough in terms of recognition, assignment conflicts, and pass defense.

The quarterback is going to make his decision off of one defender, and this decision is made after the snap. The goal is to make aggressive run defenders more apprehensive. Their fundamental approach is to block level 1 defenders (defensive line), then read level 2 (LBs) or level 3 (safety).

Coach Darlington’s advice is to build RPOs off of your own run schemes, not somebody else’s. So while the specific base plays he uses in his RPO game may not fit well, perhaps some of the concepts will.

I’ve already covered his single wing power running game which uses numbers to identify the run plays. In his non-single-wing formations, he uses words to call the run plays. Single syllable words are strong-side plays, two syllable words are weak-side plays. And, I think the biggest difference between his single-wing formation and non-SW is the presence of a blocking back.

Next, he will attach an RPO tag to the base play. His tags, routes, and reads are:

Finally, there are two more tags they use to constrain the play:

Let’s look at the Slash tag and read first for an example. Imagine you are running a standard Shotgun Wing-T Right formation (TE right, WB right, TB left). The QB is going to read the weak inside linebacker as he receives the snap. Is he flowing with the play (reading guards or reading the tailback flow)? If so, that is his trigger to throw the slant to the backside. He would at least have a split end to the backside, might also have a second receiver in a slot position. Next, he looks for the open window by reading the next outside LB (who might actually be a safety).

On the other hand, if the weak LB hesitates and stays home, then the QB would hand the ball off. It shouldn’t be as important to block this player now.

Let’s look at the Stab tag next, where we read the strong-side force player. Does he come up to defend run, or does he drop into coverage? You might run this with an end-over formation to give at least one split player on the strong-side for the slant. If you are running shotgun Wing-T, you might also put the slot out to the strong side. I think it would be easiest for the QB to just read inside to outside on the slants once he makes the decision to throw. One common opportunity to exploit here would be the TE on a LB blitz. The TE runs a 1 step slant (almost like a post) and when the LB vacates with a blitz, it looks almost like a pop pass and can go for a lot of yards.

The QB is reading the force player, and you may want to run this from trips to the strong side. So perhaps “DUCK HAMMER” call (QB buck sweep, bubble screen). The inside receiver (#3) is running the bubble, the #1 and #2 are stalking to block the bubble. QB reads the force player - if he goes out with the bubble, keep the ball and run buck sweep. Otherwise throw the bubble.

This is a designed sprint out run / pass play that looks similar to a triple option. It is blocked like power with the back-side guard skip pulling and leading. The QB is sprinting out to the power side and reading the DE. The receiver (you might run this end-over, or to a split-end side without a TE) runs an out putting the force player in conflict as the QB sprints out. The back-side slot or wing is running a shovel pass route. On the fifth step, the QB must make the decision to throw the out, keep the ball, or toss the shovel pass (which ends up flowing like power). If he’s tossing the shovel, that means the DE and force player were taken out of the play so did not need to be blocked.

A few ideas to consider. This is based on Rick’s advice, as well as things I’ve heard from other clinics. Haven’t done RPO myself yet, might do it this coming season.