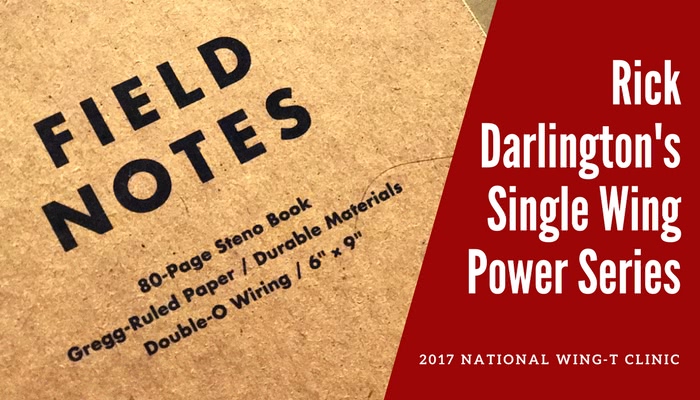 Hmmm, a single wing talk at the National Wing-T Clinic? I was intrigued for sure. I first learned the ins and outs of the single wing when I read Dave Cisar’s Winning Youth Football which features a modified version appropriate for youth football bobble heads. There’s certainly a shared heritage between the Wing-T and single wing. I’m sure single wing coaches chuckle at wing-t coaches who decide to run “shotgun Wing-T with an unbalanced line”. Hey, just allow direct snap to either the QB or TB and you are now running a single wing! 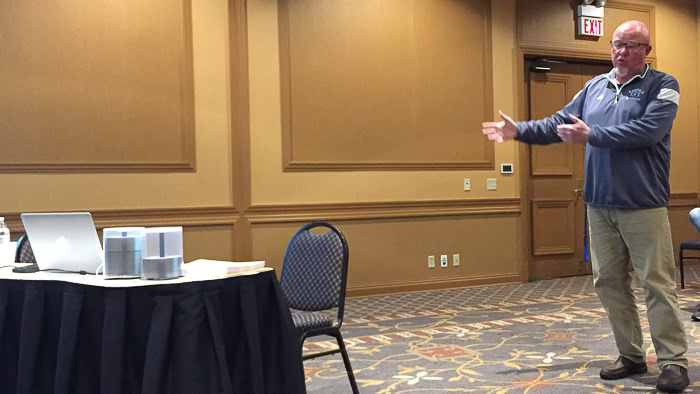 Rick Darlington is the head coach at Apopka High School in Florida, and his record there as 151–39. I’ve never coached in Florida, but I suspect the talent gaps can be huge there between different programs so having this level of consistency reflects well on the quality of coaching. Rick said he adopted the single wing as he entered a season without a QB – someone said “you should run the single wing!” I guess he had to Google it to find out what it was.

If you like what you see here, make sure you head over to Rick’s site and consider purchasing his materials. He has extensive videos along with voiceovers showing more details of the play diagrams and line calls.

This first article is on Rick’s power series which would be very easy to incorporate into a Wing-T offense. I’ll write one more article about his spinner series, then another about how he has incorporated the run-pass option (RPO) into the single wing.

Why Run the Single Wing?

Rick likes the single wing because:

Above you can see the basic strong right formation. Rick flips his line and he believes this leads to better player specialization. Player specifics:

In Rick’s offense he uses “Darter” for right, “Blue” for left.

The first play is the power sweep play. If he wants to call power sweep to the right, the call would be “Darter 8” followed by a tag that indicates the blocking scheme or even a play variation like a naked boot.

Rick has an interesting concept he’s integrated into his series-based play calling system. Every base play has an owner: a coach or an offensive lineman who is in the best position to make a call to vary the blocking scheme or even the point of attack. The power sweep (8) play is owned by the coach because the play attacks the flank and, in his experience, the coach is in the best position to make the adjustment. As you’ll see with the next play (power, or “6”) an offensive lineman may be the play owner. Each play will have just a single owner, and a given player (or coach) will own just a single play. I like the simplicity and elegance of this approach. It also forces an economy of plays in the system but allows for multiplicity with the different blocking schemes. 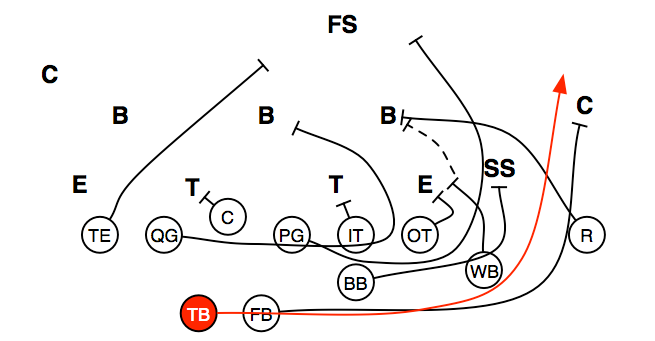 Let’s get back to 8. The base call is Blood, so the full call for power sweep to the right would be “Darter 8 Blood”. The rules for each player are:

The OT and WB looks like a zone / reach step, and they work on stepping together to ensure they stop the DE. If the OT is successful in his reach, the WB can climb to the second level.

Coach Darlington uses the rule chase, which is a backside rule that usually involves a fake or influence and has that player then turn back to playside at second level to give chase and be a screen or downfield blocker.

Another term to learn: travel means that a puller crosses the center. Rick has the traveler / puller take a pre-snap look to find the number of the player he will block.

They teach the BB to maintain his reach the whole way by putting his head outside and continuing to strive for reach position with his hips outside. In Rick’s opinion, the force player is usually taught to keep his outside arm/shoulder free to fight this reach, and the BB can use this against him by reach-stretching the player to the sideline. This is why the FB will read the BB block: if he sees the BB stretching the reach outside, the BB will cut up inside for his block on the corner.

Here are some variations Rick talked about. Remember the above base play is “8 Blood”.

You may have noticed that Rick’s rules call out a specific player (safety, corner, etc.). This is exactly how he teaches his blocking rules (and reinforces against scout defense): he names position players and doesn’t use language like “first threat outside DE”. Food for thought, as this is certainly not how I’ve taught blocking rules in the past.

The “6” play is the classic Power. The coach calls the play (e.g. “Darter 6”) but the owning player calls the variation. For Power, the owning player is the OT. The base call is “Tight”, when the IT is covered and there are 2 defenders outside this DL. So the diagram below is for “Darter 6 Tight”. 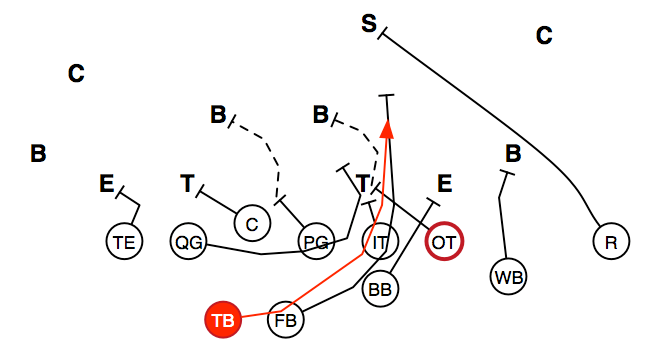 Before I show the rules, here’s a word Rick uses for Gap/Down/Backer: Railroad. The players visualize being on railroad tracks. If they don’t find a DL in first three steps, go to second level.

Rick teaches the QG and FB to “hold hands through the hole” which helps them maintain perfect relative position (QG is inside) and avoids blocking conflict. My guess in the diagram above is that the FB would end up going to safety while the QG turns in on the LB and possibly help with the OT.

Remember, the OT is the owner of this play so will make these calls based on what he sees. The first thing he does is look inside – is there a man on the inside tackle? If so, look from head up on him to ouside on the line. If there are two men, make a tight call. If just one, make a loose call. 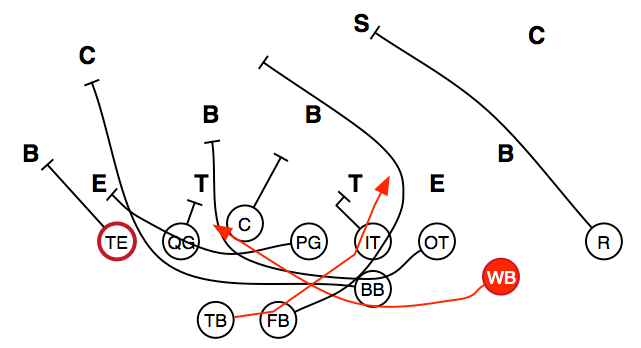 The Counter play off Power is “7”, so “Darter 7” will be a counter run to the weak side (left). The TE (who is in a traditional weak tackle position) is the owner of this play.

This is a traditional ISO play to the strong side, with the IT owning the play. The BB is leading for the FB who take a direct snap, while the TB runs fake Power Sweep action. Rick didn’t talk much about this play but I’ll try to piece together the calls and rules for it. The base version of this is Bama. 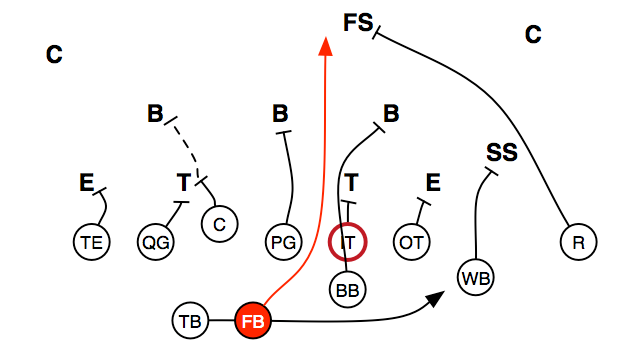 Rick only had a single variant:

That’s it for the Power Series. As a Wing-T coach, what can you take from this? I’ve got a few ideas: