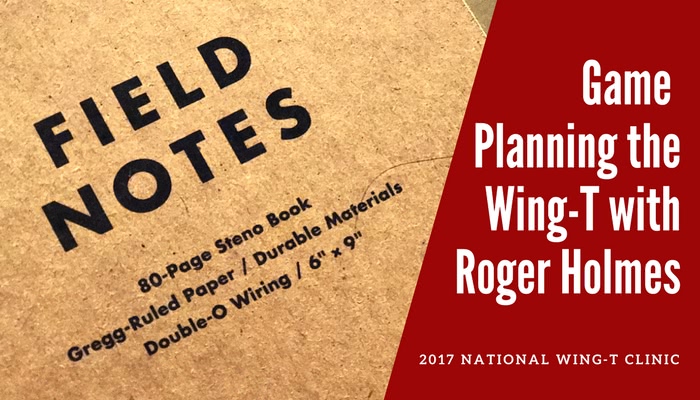 Get more information on Roger Holmes' systems at his online clinic store.

Roger Holmes concluded his clinic Wing-T talks with a session on game planning for the Wing-T. These are the talks I enjoy the most, where we get inside the head of a successful coach and learn how they make key decisions before and during the game.

He believes in being multiple, and if the defense is going to be balanced then he will run a lot of unbalanced formations. Then you have to be smart about monitoring how the defense adjusts.

The Wing-T is a ball control offense, and Coach Holmes designs his scheme around what the quarterback can do. If you only have buck, belly, and down then you will have a hard time versus most defenses. Because Roger rarely has a quarterback with a strong throwing arm (he said “he couldn’t throw it in the ocean if he was standin’ on an island!”), he looks elsewhere:

How Defenses Adjust to Unbalanced

Coach Holmes asserts that when using unbalanced formations, the defense has five different was to adjust. Try to know in advance what they will likely do by studying film.

On Sunday Coach Holmes will work with his staff to try to identify how their opponent will adjust. They may have to go back to the previous year’s film to see how they adjust to similar situations. They will only try certain plays vs. certain adjustments. He will look at what they gain vs. each adjustment, and the ones they choose will be the only plays they will use in practice against that adjustment.

During their team period they will run 7 plays in a 5-minute period. They must get them right, and will stay until they do.

The coach in the press box must have a complete understanding of these adjustments and be able to communicate these to the head coach (or OC).

Coach Holmes will script the first three plays of the game, and this script will include an unbalanced formation and play, their best play, plus one more. He will also build a list of 7 plays to run against each front he expects to see in a game. These will also involve simple, small adjustments such as running sweep one hole tighter.

Roger is a big proponent forcing the #4 defender to play in conflict by running play-action passes. Force him to defend the option and the flat with the belly and ride passes. You can also create conflicts with speed option.

Sometimes you will get surprised by a defensive look and things won’t go well. Appeal to your players to hang in there and make it to half-time so that you can make adjustments.

The underlying scheme is sound and has withstood the test of time! Surround yourself with people that want to win, not be popular.