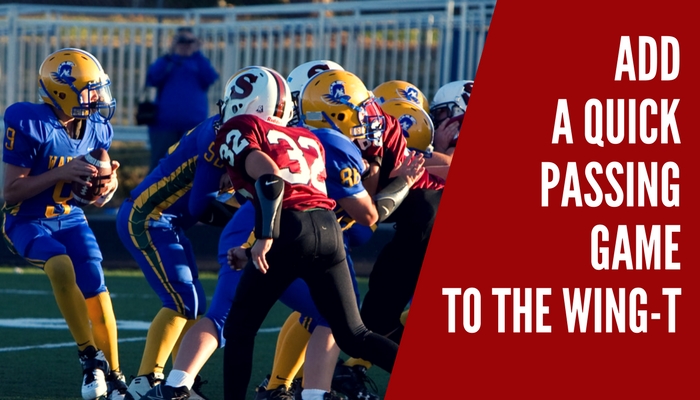 My co-head coach Brian and I had several objectives going into the past season, and one of them was to incorporate a stronger non-play-action passing game. We have great confidence in our four primary play-action passes (waggle, belly keep pass, down pass, and jet pass) but there are times when you want a straight passing game to work. One example: on obvious passing downs, faking a run is an unnecessary distraction.

We’ve coached the Wing-T long enough to know that we have to be realistic about installation time for a passing game. A key constraint for us has always been getting an adequate protection scheme installed. If we get too complex here, it will take away from our run game which must remain our primary focus. For that reason we opted for a quick passing game (3-step) vs. a 5- or 7-step passing game.

To “get smart” on quick passing, I turned to air raid guru Erick Streelman who runs the site Win With The Pass. We ran everything this season from under center, so it was a true 3-step drop package (though, as I’ll call out later, sometimes we were taking more than 3 steps). Under shotgun or pistol, it would look more like a one step drop or just a pivot before the throw.

Erick gave me free access to his online school for a while last year, and I truly appreciate the support he gave me knowing that I was adopting a true air raid but just incorporating concepts into our Wing-T. Thanks Erick!

Eric simplifies his base quick passing system with mirrored routes that work so-so for the base Wing-T. I say “so-so” because the TE side of the formation with a TE and WB is a tight bunching for some of the routes so we had to mess with the timing at times. It also makes things more challenging for wings because on the TE side they are the widest receiver, while on the SE side they are the #2. If we had put more thought into this ahead of time we might have change the routes. This coming season we will likely run some pistol with both ends split out, which will make his core quick game fit in even better. 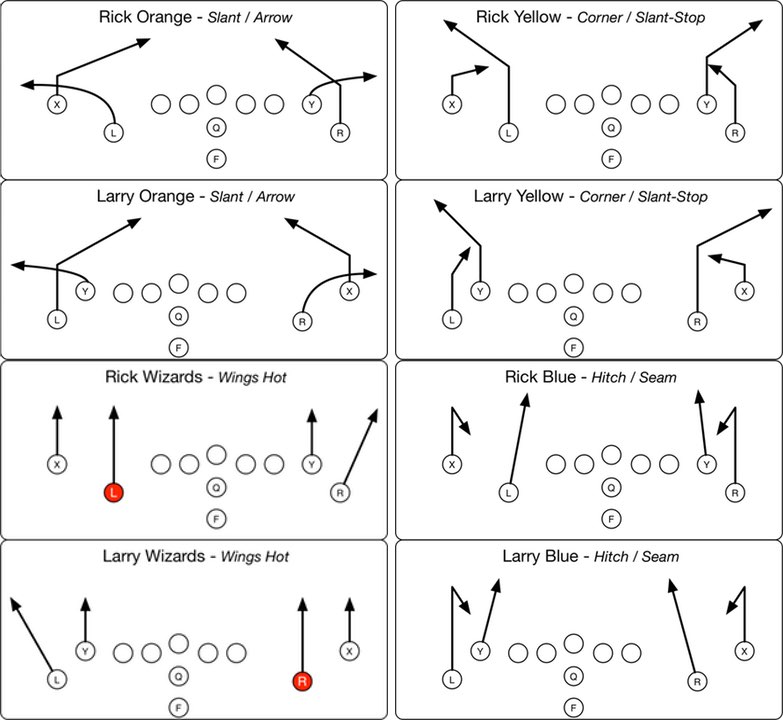 So what did we use from Erick’s system? Primarily these quick game plays:

Additionally we installed two other passing plays that were part of the overall package and were plays we had run in past seasons:

For reasons that I’ll go into more deeply in a future article, we used an offset fullback for this passing package starting in about the third week. It meshed with one of our key run schemes (power jet sweep), and ended up simplifying our protection scheme. The FB is offset over the tackle. Here’s what we did:

Early on we had the QB doing a straight 3-step drop. We had assumed we would evolve to having the QB read the coverage pre-snap and choose a side to throw, so we wanted to keep him in the middle. This never happened, and we had a hard time getting good protection for him. I take responsibility for this as the offensive line coach – we didn’t put in the time necessary with both the line and FB together to make this work properly.

We solved this by simplifying everything and having the QB simply sprint out toward the offset FB (without a reverse pivot). Keeping him moving toward a flank helped him anticipate and avoid surprise pressures, plus our protection got better as the rules simplified.

What didn’t work well was that the QB would often hold the ball for too long, turning our quick passing game into a more traditional sprint-out passing game. Toward the latter part of the season we focused on timing and release and shortened everything up. The slant-arrow (Orange) was our most common and productive play – the defense has major conflict when that wing sprints to the flat, and our best receivers and athletes were in our wing positions.

Looking Ahead to This Season

This coming season we will refine what was already working well while trying to enhance our passing game with a more balanced attack. This will mean more pistol, spreading wings out to slots from time to time, and running with two split ends. As long as we can run our base running package from these different formations we can stay balanced and unpredictable. For example, when we split both ends we can run belly to either side without any blocking rule changes.