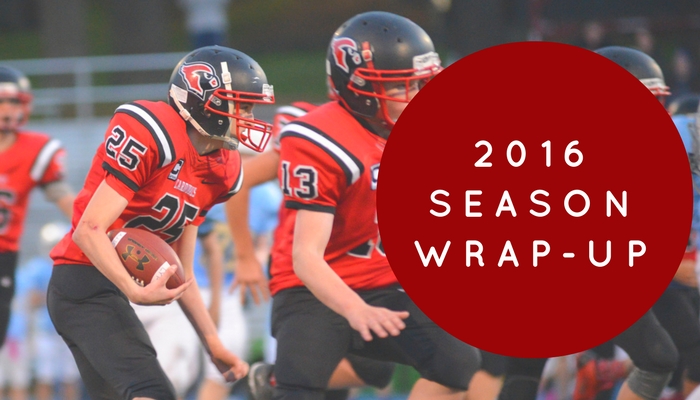 None of the stats below include a Kansas plan play-in that we had to compete in at the end of the season. While that might have been the most exhilarating night of the season for us (plus, Cubs won the World Series…), it isn’t truly a football game with respect to this sort of analysis. Play calling is different, it is a short field, and there’s no clock management.

We had 22 red zone opportunities (with possession inside the opponent 25 yard line or in), and converted just 12 of them for a 55% red zone efficiency. Our struggles were especially notable early in the season when we started 1–3. We allowed ourselves to get into too many 3rd and 4th and long situations in their red zone, either because of penalties or negative plays. This is a number that needs to improve significantly next season.

We were almost balanced between double wing (Rick and Larry, aka Red and Blue aka Rose and Lily) and traditional Wing-T formation (Right and Left). We were in an SE over formation about 1/3 of the time, though I suspect in the second half of the season that was 50% or more.

We were very well balanced running to and against strength. If our formation strength was to the left, we were slightly more inclined to go against strength (to the right). If our formation strength was to the right, we tended to go with strength to the right. I wish I could share more about boundary / field tendency, but our Hudl tracker rarely captured the hash we were on, and I didn’t see much value in going back through every game to fill it in.

We called 33 different plays this season, but our attention should be focused on the core group of plays. Let’s look at the plays that comprise just over 80% of our total play calls (pass plays are in bold):

How do I define a productive play? A play is productive if it either gains 4 or more yards or we gain a first down running the play. The idea here is you want to include short yardage plays like a QB sneak and award it for being productive if it achieves its goal. I prefer using productivity as a metric than average yards gained because a few big plays can skew the results. I’d rather have a consistently good play than one that breaks it big every 5 to 10 plays.

Before I dive into some analysis and conclusions from the above, let’s look at a few other plays that aren’t on the list but were very productive:

Not only was Wings Hot productive, it averaged 35 yards per completion, and was completed every single time we threw it. There’s a case to be made here: if you are going to throw the ball in a straight drop pass, throw it over the top of the defense!

Finally, a few plays that are normally staples for us that just didn’t work well (and hence, as the season went on, we moved away from them):

I probably shouldn’t be so dismissive of Jet Pass as it hit big a few times, averaging over 10 yards per try. Down and Belly Keep were dismal for us though, averaging negative yards when you take into account sacks.

Don Smolyn mentioned in a talk last year that his best plays will have a 60% productivity or higher, sometimes reaching 70%. We had two core plays reach that benchmark: Jet Sweep and Buck Trap. Down and Down Sweep were knocking on the door. We may have given up on Counter XX too early – we never ran it again after our 2nd game.

Before the season Brian and I said we wanted to make Buck Sweep a core play, and I think that mostly held true. It was our second most-called play, and even though it wasn’t in the upper group in terms of productivity, it did average 6.8 yards per call.

Our passing game needs to improve, especially our completion rates. We took too many sacks and had too many dropped passes. As I mentioned in the quick passing game article, we need to both improve our protection and the speed at which the QB gets rid of the ball.

We need to simplify our playbook even more. We paid the cost to install a number of trick plays (none of them worked for us), a Now Screen that we only called once, and several counter plays that never became part of our trusted core.

I think there is room for both Buck Sweep and Jet Sweep in our offense. Jet attacks the alley / wide flank, while Buck attacks just outside the TE. I wonder if we need both Down and Belly in our playbook: maybe we can run a Belly to the strong side with similar blocking rules?

We obviously have a lot to think about going into this season, and of course having just attended the National Wing-T Clinic I’ve got too many ideas swirling around in my head. Fortunately most of those ideas are in line with simplification and getting better at our core identity.