Don Smolyn is the head coach at Lenape Valley Regional High School (Stanhope, NJ), and he's been doing it possibly longer than you've been an adult (or maybe even been alive). He gave one of the more thought provoking talks at the National Wing-T Clinic and it wasn't even about the Wing-T. 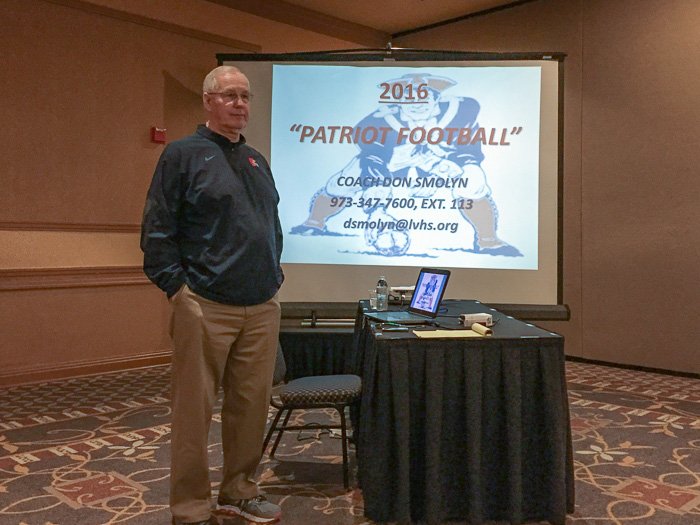 Coach Smolyn started with some general commentary about coaching and preparation. Some of his key points included:

Don then made a very interesting point: average touchdown drives are six plays (he threw out one play drives for this analysis), usually with one big play of 20 or more yards. Each of these drives also average one short yardage play (e.g., goal line play or a 3rd and 1). This is important to Coach Smolyn as he believes that if they can be perfect for 6 reps, they can greatly increase their chances of scoring on each drive.

Some other game statistics he pointed out (this is for high school of course, youth games would likely have 20-25% fewer):

His conclusion from this data: he can no longer conduct practices where the ball is spotted on the same spot on the field play after play.

He usually runs practices at 3 hours, and never goes full live in practice. Coach Smolyn runs double TE about 85% of the time, and has a very limited number of plays (small playbook). But… he has numerous blocking variations on those base plays. One of his favorite base plays is the traditional Power play, and I'll cover that in a future article.

He compels coaches to chart what they run, track effectiveness, and use it to inform what you call in games. He puts the plays in a spreadsheet then tracks how many times the play gained four yards or achieved a 1st down or touchdown. Statistically this is much more informative than tracking average yards gained per play because it effectively throws out big gains. A five yard Power is just as effective as a 40 yard counter in this analysis. So you count up the total times the play was effective then divide by the number of times the play was called, and that is your effectiveness. He strives for 60% or higher and with his best plays will exceed 70%.

Finally, don't waste time on plays you won't run. Make a play earns its way into your playbook and practice time.

This part of the talk could probably be an entire article by itself. It was eye opening to me in sort of a hand-smacking-forehead way. Coach Smolyn recommends that coaches use the preseason to take the team onto the field and walk them through 13 distinct game situations. Explain the issues with each and incorporate the, directly into your practice routine. Here are the 13 situations:

The idea here is you explicitly put some of these 13 situations into each practice plan. Raise the football IQ of your team by briefly talking through the situation and what the team goal will be, and how the rules might impact certain decisions or behaviors.

How do you prepare your team to be successful against a variety of defensive fronts in preseason, when you might not even know what to expect from your first opponent? Coach Smolyn runs “three defenses” on Mondays, and it looks like this:

Off Season Prep for Preseason

Don recommends that you come up with a four week preseason calendar on the computer, then plug in everything you need to win the first game. This should include those 13 situations mentioned previously. Things won't always go well but stick with your plans and grind through it. During preseason you must maintain focus and intensity, and during the season you can't just go through the motions. Your first five practices should be planned out in detail by June.

Schedule talks that you'll be giving to the players so it is not random and ad-hoc. This could include talks on drugs, social media, leadership, etc.

Coach Smolyn applies modern thinking to his practice approach, with rapid reps and as little standing around as possible. For example, if working on an installation with the offensive line, the o-line coach will stand in the middle with two different lines facing him and will bird dog and coach from there.

They script everything, and the script should mirror your game or like you might script your six best plays. This past year they went away from dynamic warm-ups and calisthenics and started with a team takeoff period running 10 plays on air. This coming season they will change it to “six perfect plays”.

Let's talk more about how he scripts plays in practice:

The script for each practices will have each of these scripts, plus on the reverse side will have the 13 situations with play numbers for each.

Whew, this was a dense session and I took a ton of notes. I love this framework for preseason preparation. If you ever feel a lack of inspiration for mixing it up at practice, you should find plenty of ideas here you can apply.