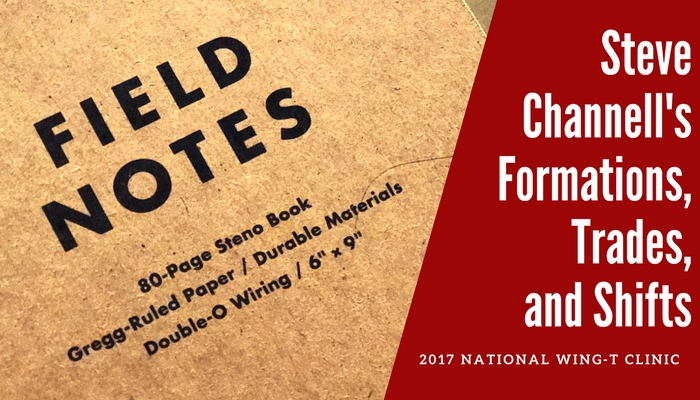 Steve Channell gave a classic talk on the Wing-T – I say classic, because he is a very old-school coach that focuses on basic, classic Wing-T with an emphasis on doing a small number of things very well.

Coach Channell is the head coach at Miamisburg High School near Dayton, Ohio. He’s had a tremendous career and spends a lot of his time giving back to the coaching community. I appreciated how engaging he was in his talks, opening each one with some light-hearted trivia questions with Hershey bars as rewards.

In Steve’s first talk he focus on how to utilize different formations and pre-snap shifts and trades to gain an advantage over the defense. I’ll also mix in some of the philosophical advice he shared because… it is worth sharing!

Why Go to Football Coaching Clinics? 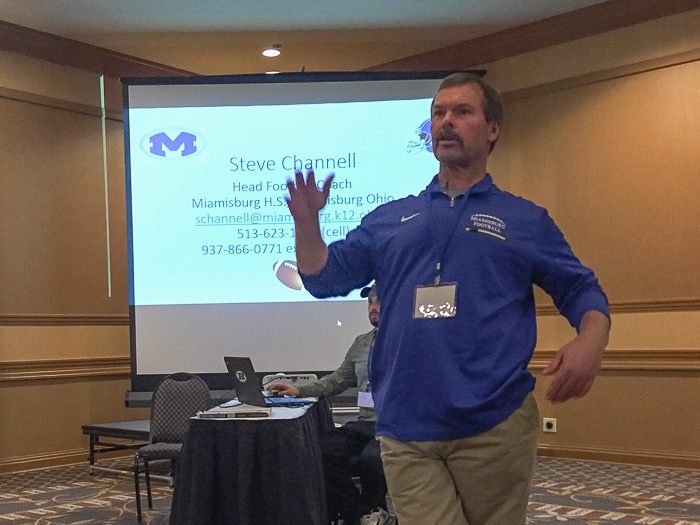 Coach Channell started with some tips on taking advantage of clinics like the National Wing-T Clinic. He summarized the “why attend?” question with these points:

Why Focus on Multiple Formations, Trades and Shifts?

First, some terminology explanation. What is a trade or a shift, and how do those differ from motion?

OK, that was probably obvious to 99% of you, but sometimes it helps to clarify language.

Why does coach Channell utilize such a wide range in formations along with pre-snap shifts and trades?

How Should You Approach Shift and Trade Installation?

When deciding how to trade, shift, and utilize unbalanced formations, he offers this advice:

When it comes to trading/shifting you have to think like a DC would and what would you NOT want to have to prepare for? What would make you say “DAMN”?

Coach Channell likes to enter each week with formations or alignments that his opponent has not seen yet. There needs to be enough variation, and threat of variation, to cause defensive preparation issues without creating undo confusion on your own team. Ideally you should stick to the same core concepts and blocking schemes.

Steve offered up these simple ways to create formation advantages:

The primary goal is to make the defense change, adjust, or stay vanilla. 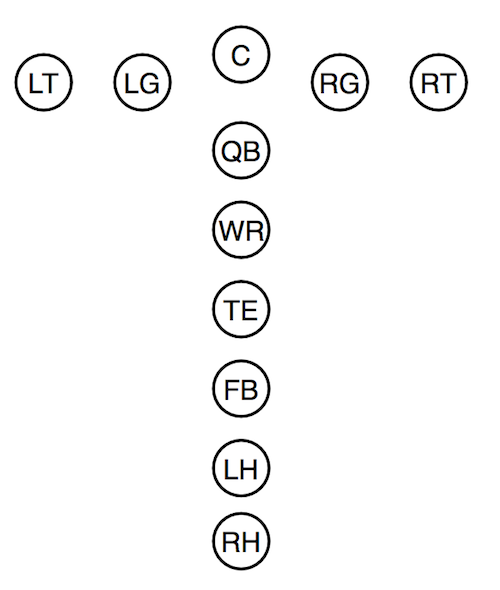 Steve likes to use a “scramble” huddle, similar to a sugar huddle but with the backs and receivers lined up in a vertical line behind the front 5 linemen. He’ll then make a call using the scramble keyword, like “Scramble Big Red to Big Blue Sweep Left”. This tells the offense to start from the scramble huddle, then sprint to the line in Big Red formation, then shift to Big Blue.

Coach Channell uses two ways to call for these: verbal calls and hand signals. He’ll make the calls at the LOS, from the “scramble” as I mentioned above, or just from the LOS. For example, “Blue Slot to Rip Slot Sweep Right” would just be a shift from a typical huddle or no-huddle break, then buck sweep to the right. The idea is that you can shift between any two formations in your playbook, though special attention should be paid to the SE – usually it isn’t a good idea to flip him across the field as you give the defense too much time to adjust. Personally, I would probably jot down sensible shifts on my play caller until I got comfortable with these.

What if the defense is aligned to stop the play that was called? Coach Channell likes to have two options available:

Steve doesn’t flip his line, which makes it easier to do some of his trades and shifts as well as make “opposite” calls like I mentioned above. If he flipped his line like I did last season, there would potentially be a lot more players moving around on the shifts and it would be more difficult or even impossible to make “opposite calls”.

Coach Channell claimed that he shifts about 30–40% of the time.

He recommends using unbalanced formations to your own boundary, which makes it harder for the other team to see. This is especially true at the youth level where coaches must rely on players to detect this sort of thing (no eye in the sky or box!).