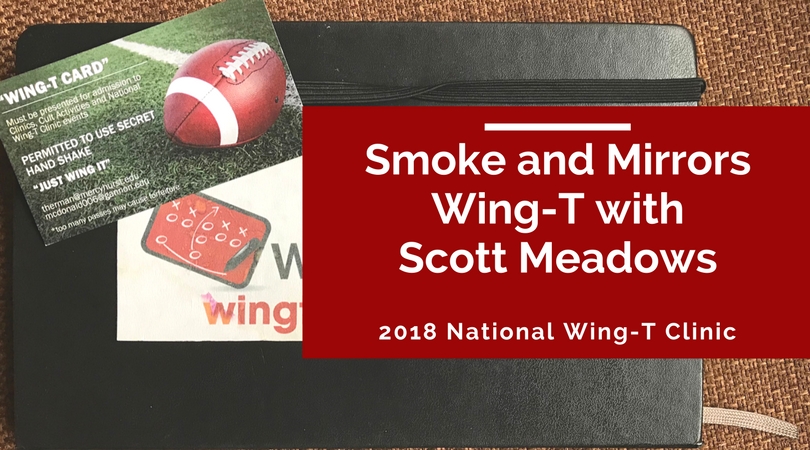 My first session at the 2018 National Wing-T Clinic was Scott Meadows talking about his Smoke and Mirrors Wing-T scheme. Scott retired after the 2016 season but continues to help other coaches and speak at clinics.

“Smoke and Mirrors” is a shotgun based version of the Wing-T that relies on a variety of formations and a running QB. As Scott says:

For many years, traditional Wing-T was what I loved and ran. A few years ago I came into a situation where the school I was at was small and we only had 4 running backs. I was used to 6–8 in the rotation at other schools.

This is what made me move to the shotgun Wing-T. It put another WR in, spread the field and gave us 2 deep at RB, rather than the 1 backup for 3 positions I had before. This really opened up my eyes to what the Wing-T could do.

Coach Meadows uses the same numbering system as the base Wing-T. He flips his line (strong and quick), with splits at 2 feet. The TE splits at 3 feet, and all linemen out from center put their earhole on the center’s hip.

The QB heels are at 5 yards. The FB will be the best running back and places his heels at the toes of the QB, straddling the inside leg of the tackle. When he has a wing, he will be tilted at 45 degrees and just “touching” outside hip of nearest lineman. The Z slot if in twins will be spaced at 6 yards, the X at 12 yards.

On buck sweep, he will slide step to play side with the FB while reading backside (ball in belly in front of QB). If he sees the defender turn his hips to chase the sweep, he will keep the ball and run backside.

The words have meaning to specific players:

Coach Meadows used 115 formations in his final season, with the primary formation being used “Green Twins”. I think Green Twins would look like this:

They will tag RPOs onto buck sweep, with a default Bubble call:

If there’s an A gap threat on buck sweep, the SG can make a call: 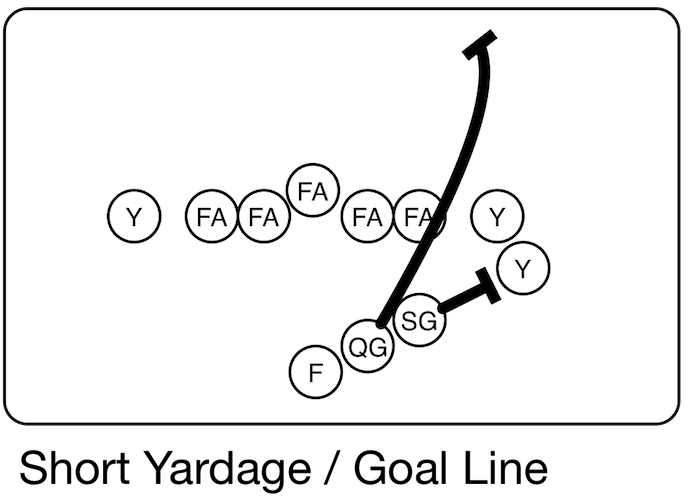