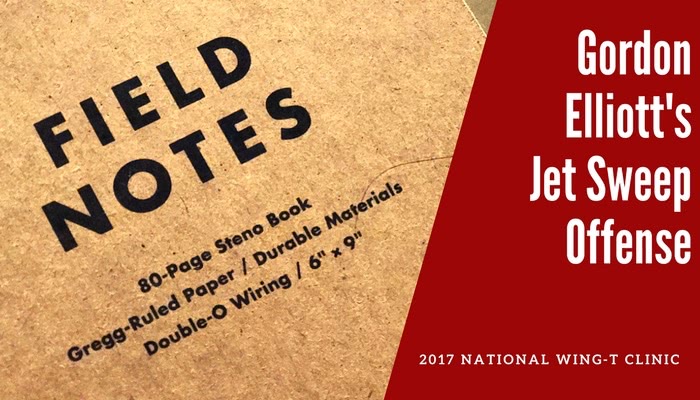 Gordon Elliott is the head football coach at Auburn HS in Washington state. He has a Portland metro heritage having coached at Camas and Columbia River HS for many years, and after talking with him after the clinic we learned we know a lot of the same folks from around Portland.

Coach Elliott builds his offense around the jet sweep from a double wing set, usually with two TEs. His flavor of double wing is more influenced by Wing-T than flexbone, and he maintains wide splits and will often flex his TEs out. He stays under center and runs his jet sweep as almost a power sweep, running it up and inside.

He strongly suggests that coaches limit the number of base plays they install, and he has 5 base plays that he uses. This enhances repetition and execution, and still allows him to attack every gap. His freshman run the entire offense and he has them practice with his JV squad. They structure their practices like Sherwood did when my sons played there, with the varsity offense coaches splitting time between varsity and JV, flipping with the defensive staff. This gives a lot of face time with the younger kids and helps breed consistency.

Everything Begins with Jet Sweep

Jet is his base, and he will work from there after seeing how teams are reacting. Are they rotating secondary? Shifting with motion?

He utilizes an offset fullback to the playside for jet, so with two TEs you can think of his strong side as the FB offset side. They use a reach blocking scheme, with the FB reading the TE blocks on his side. Not every TE will be able to effectively reach their man, so he teaches a bench block technique. If the DE is fighting for outside leverage and the TE cannot reach him, he will turn him out and block him to the bench. In this case the FB would turn up and lead inside this bench block.

He will also sometimes use a crack block on a 5 or 6i technique where the tackle is unlikely to be able to reach. They will block down with the TE instead and pull the tackle to reach the next man outside.

Outside Around (Jet XX)

They reach block this just like the jet sweep, but the QB will be the lead blocker instead of the FB. The QB hands off to the jet motion back normally, but the wing-to-wing handoff is “tip to tip”. The QB reads the the TE block, and if he reaches he will go around to the alley. If it is a bench block he will cut up inside and lead.

On both outside around and jet, the backside TE has a cutoff block and Gordon stresses that this is a very important block. I know personally I don’t practice these backside cutoff blocks enough. 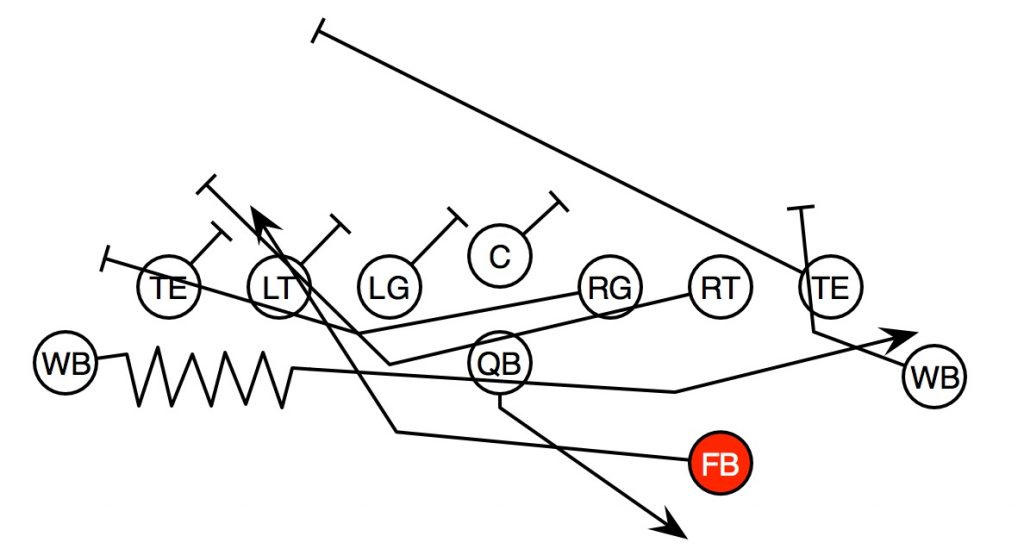 This is the old fashioned G/T counter. Every eligible ball carrier can run the ball on scissors so they use this scheme in a variety of ways.

The rule on playside (TE through C) is Down (gap / down / backer). The backside guard kicks out, and the backside tackle pulls through.

The fullback takes a “j step” with his inside foot, then puts his outside foot up, turns and goes.

Against a wide 6 defense, widen out the TE and kick out the man over the tackle instead of the DE.

You can also run this to the QB if he is a runner. The FB is a blocker for the backside DE, and the QB just spins and holds off the fake jet sweep. The rest of the blocking is the same.

They also do “XY Scissors” which gets the ball to the TE. The FB fills where the TE would have been, and the TE bucket steps to get on the path to take the handoff.