I’m overdue for an update on our play call sheet so I figured I’d share one that we used mid-season this year and explain some of the key elements. This sheet was a collaboration with my co-head coach Brian who is responsible for play calling. Think of me as the designer and advisor, but when game time hit it was important that the call sheet primarily support how Brian wants to manage the game.

The play caller is printed on legal-sized (8.5“ x 14”) paper and laminated. The back side of the caller is filled with our offensive, defensive, and special teams depth charts. You can download a PDF version to help read along, and I’ll also give images from specific sections throughout the article.

Time out tracking and clock management

At the top of the caller is a tracking area for timeouts for both sides. I keep a sharpie tucked into my shirt during the game and mark off on my laminated copy as timeouts are taken.

You’ll also see a “take a knee” grid which gives us a quick way to determine under what conditions we can take a knee without giving possession back to the other team. The rows are the current down, the columns are how many timeouts the other team has. The time given is the maximum amount of time that can be on the game clock when the referee “chops” to start the play clock. For example, if the other team has 1 timeout and we have 2nd down, if there is 1:06 left on the clock (or less) it is safe to take a knee.

In the upper left (where you see Cowboy / Dodger, etc.) you’ll see our primary play call matrix. We group the plays by series, and the column heading and number are how we will usually call in the play if we need to relay it quickly from a distance. For example, to call Down it would be “Right Cowboy 5”. We could also say “Right Dodger 5” or “Right Blue 5”. The “code word” you see with each play is another way to call it, usually when we go no huddle. All of the players know the Down play is “Texas” so if the team was in no huddle we would just yell out “Right Texas”.

Every week I mix up this matrix and move things around so the codes are never the same (though “Texas” is always “Down” throughout the season). This requires that I also print out new wrist coaches, but only the QBs wear the wrist coach so not a big deal. 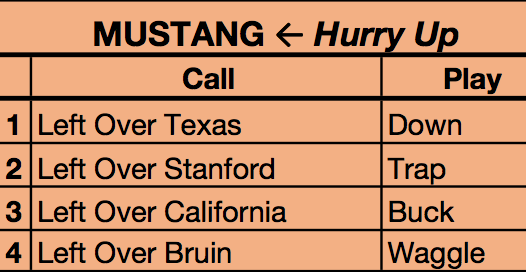 Actually, only Mustang is a true “script” and represents a sequence of four plays that we practice all week that we think will be good against the next opponent. This allows to get into a hurry up, no huddle without sending in a play after each down.

The plays under Tank are suggested plays to call when we are trying to run out the clock. Generally speaking they are sweep plays that go to the numbers (not buck sweep of course) and we coach our players to stay inbounds when we are in Tank mode. 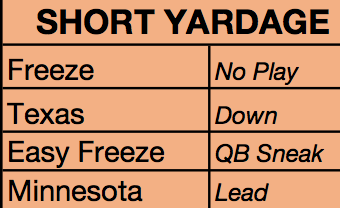 These are just quick reminders for Brian to find plays to call under the specified situation.

The punting section is just a reminder of our punting philosophy, which was generally to avoid punting. We actually started the season without a traditional punt play – we used a roll-out rugby style run/pass/punt option that just wasn’t working well enough for us. Midway through the season we installed a shield punt which worked perfectly for us. Never had a block or a return and (I still need to do some analysis) I think we averaged about 30 yards a punt.

The “can lead by 45 points” is a reminder to us about our league mercy rule: if we ever lead by 45 points, our association president will have to write a letter to the league leadership explaining how we let things get out of hand. Interestingly enough, we put this on the sheet after our first week when we had to put the brakes on and stop scoring. The rest of the season? Close game after close game: we were neither on the giving or receiving end of any sort of mercy protection.

For the first time we invested heavily in a quick passing game, leaning heavily on what I learned from Win With the Pass. Just like it took our players a while to memorize these mirrored routes, it took the coaches a while as well. We used every play you see on the call sheet except for Blazers (all slants).

How We Can Improve Next Season

This call sheet, and much of our calling scheme, was built around a plan to run mostly no huddle with fast tempo during the season. This didn’t happen for a variety of reasons: coach comfort, lack of team depth (we might wear ourselves out before our opponent), and at least half of our games where we wanted to slow everything down to the max rather than speed up.

Another area that I think needs some work is matching formations with plays. We purposely install our offense to be mostly formation-neutral to give us as much flexibility as possible. Additionally, we kept things easy by building in play direction automatically based on formations and offsets. Still, there were times when I know Brian would have appreciated hints on the best formation to use for waggle (hint - our two QBs were right-handed and struggled throwing the ball when rolling out to their left).