A screen passing component to the Wing-T can be powerful addition. Defenses will often pack the box and bring inside blitzes which can play right into the hands of a well executed screen play.

Two big challenges at the youth level are having the practice time to run screen plays well, and having a quarterback that can execute the play well given the timing nuances involved. Last season we waited to install a screen play until we put in our Pistol Wing-T package. Screen plays, especially quick receiver screens and tunnel screens, are much easier to execute from the shotgun. They are also much safer to throw because your much less likely to have a backwards pass.

While we installed two different screen plays, we only ran one during the season: a quick / tunnel screen to the wide receiver from a balanced double wing, pistol formation. The other screen we tried to install was a slow screen to the fullback, which was designed to be a progression play off a WR fake screen. We just couldn’t get the touch and timing right on the delivery to the FB so the play seemed too risky.

We didn’t have great success with this play, but we saw gradual improvement and I think if we’d been running it throughout the season (we only ran Pistol plays in 2 of our 9 games) I think it could have become one of our top passing plays. Let’s chart this one out, look at some film, and review my favorite drill for teaching the line how to block on the screen play. 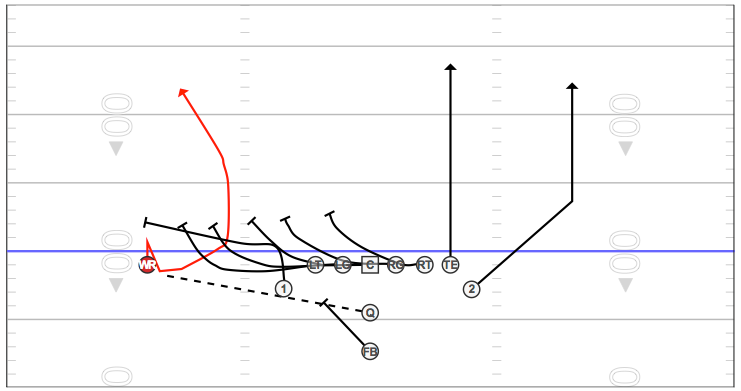 Here are the assignments and rules:

Let’s look at some film from this play going badly.

A few things happened here. The throw wasn’t very good - too high and the WR had to back up to catch, taking him away from his blocking. We never got a good block on the defensive end, and the WR didn’t turn in like he was supposed to. Their defensive tackle on the back side did a great job pursuing the play.

This next one looks a bit better.

If the receiver just stays inside behind his blockers, this easily becomes a 10–15 yard gain. The release from the offensive line was very good. The wingback did a better than average job blocking the corner, and it is clearly not his fault that the CB ends up making the tackle.

This screen resulted in a decent 5 yard gain and I think the WR finally executed his after-catch running path correctly. Watch the left tackle on his release - his rule is “out, up, in” and he unfortunately didn’t finish his task.

It takes practice and very specific drills to get linemen ready to block in space like this. Wing-T guards are usually well prepared for obvious reasons, but as you can see in the film the tackles often struggle. I use the cage drill, which I think I learned from Coach B Dud as my primary screen blocking drill.

This drill is helpful for more than just the screen game as it can be used to reinforce techniques for blocking in space for any player in any situation. You can make the cage bigger to make it a tougher challenge for the blocker, and in full pads this is a nice limited contact drill that gets the players competing. I ran a no-pad version of this drill at my clinic last weekend and you can see some film below.