I’ve been a business leader and a parent for over 20 years, and one common challenge I confront with myself as well as with others I’m coaching or leading is this: how can you consistently give effective, constructive feedback? Even positive feedback is difficult, for example how do the words “good job” help reinforce good behavior or execution?

In this post I’ll talk about a specific improvement we made this year in how we give feedback to players: grading game execution through film review. But first, let’s talk about the broader subject of feedback. Bear with me – this will all tie back to giving feedback to your players. 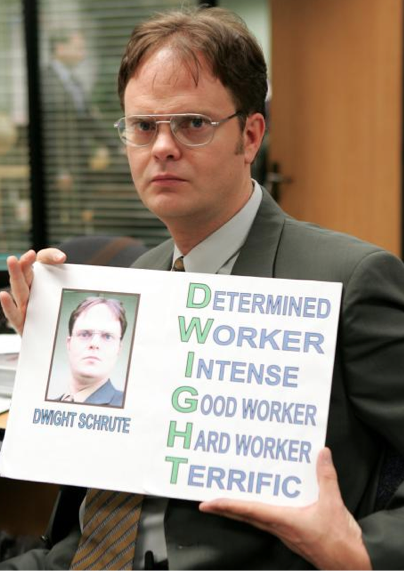 When I teach or mentor new managers in the work environment, I teach the following steps (thanks Manager Tools):

There are aspects of coaching football that make giving feedback both easier and harder than giving feedback in the work environment. During practices and games, you don’t have time nor is it reasonable by any stretch to approach a player and say “hey, can I give you some feedback?” Players expect to get feedback from coaches, but all too often it comes in the form of non-specific, unhelpful yelling. “Block somebody!” is completely worthless, while “great play!” might make a player feel better and encouraged but provides nothing specific to help guide future execution. I think this is the hardest part about football coaching feedback: real-time, quick, specific, supportive feedback during drills, team practice, and games. That’s a subject for a future post.

Football coaches have an advantage, however, over most business environments: most of us have access to film and, given the right amount of time investment, you have a gold mine of information to use. Sadly, I’m afraid that most youth coaches don’t put in the time to take advantage of this treasure trove. For many years I’ve used selective video cutups with annotation for players, and I even built my own workflow for doing this before using Hudl. Hudl made things so much easier over the past 4 years, allowing me to provide more feedback more consistently in less time.

Last season I wanted to introduce another feedback mechanism: player grading. I did a lot of research on approach and workflow for this, and found great resources here:

We did grading two different times during the season. While it would be ideal to do this after each game, I think it was too much to ask for just three volunteer coaches who also must worry about opponent scouting, practice prep, etc. We did find that the process went faster with practice. Let me walk you through exactly how we approached grading: 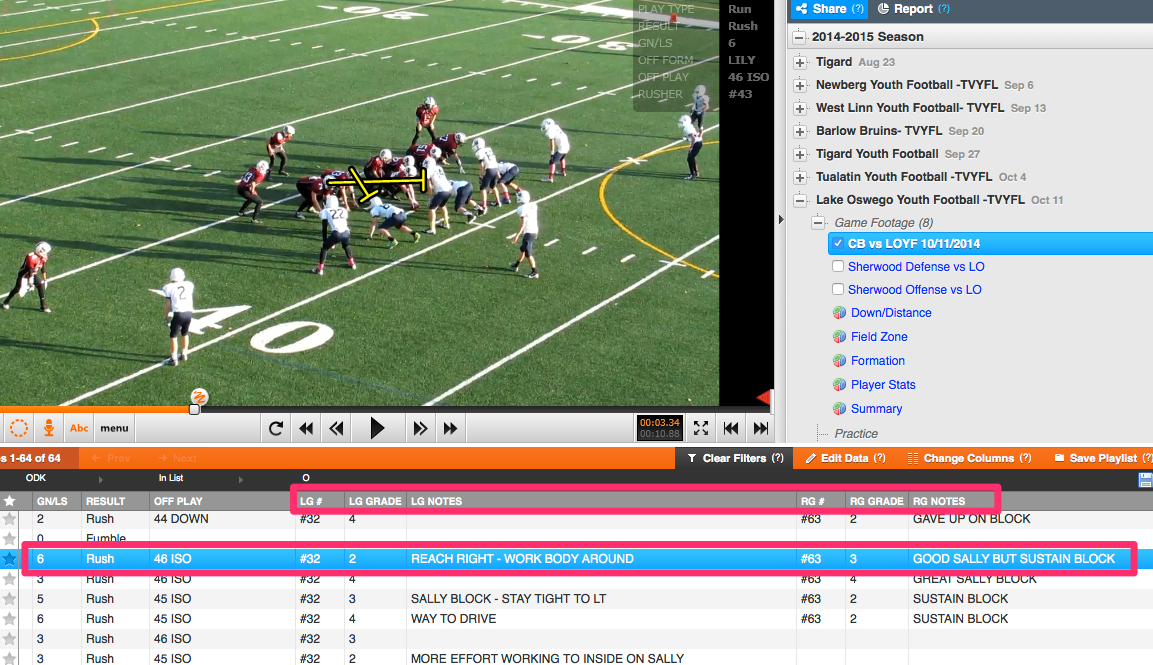 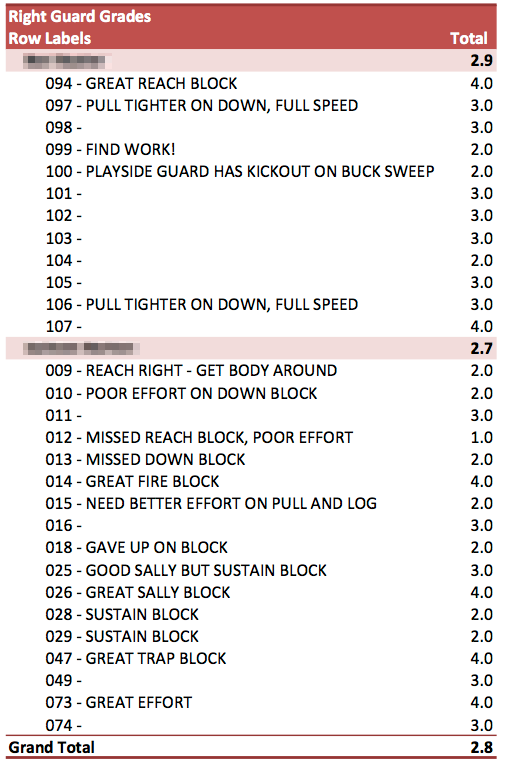 We debated how we would share the data with the players and opted for full transparency. We broke into position groups and handed out the scoresheets to players with summaries by position. So my right guards saw the scoring for all of the right guards. We explained that we weren’t judging them as players, just giving feedback on the performance we observed in a game on a specific play. We were also able to reset expectations about execution and effort (especially effort).

The players responded extremely well to this. They took the feedback like the young men that they were, and we saw renewed focus and effort. We saw better fakes and blocking by our wingbacks. We saw better execution on the backside by our offensive line. We heard anecdotal feedback from a player’s dad that his son commented about how much he appreciated the coaches talking straight to them, sharing data, “and treating us like men.”

In summary, even if you aren’t able to do this every game, commit to a grading and feedback model like this. Especially early in the season when you are potentially still settling on starting players, putting players in the right position, and generally completing your evaluation process. It won’t just help the players: it will help the coaches be more objective (avoiding the halo effect) and more prepared to coach their players.