I’ve got another gem to share gem to share from Coach Lew in Virginia: this time we get to see his detailed approach to installing the Buck Sweep play. I’ve taken a small bit of editorial license at times, but what you see below is almost completely Coach Lew’s guidance word for word. 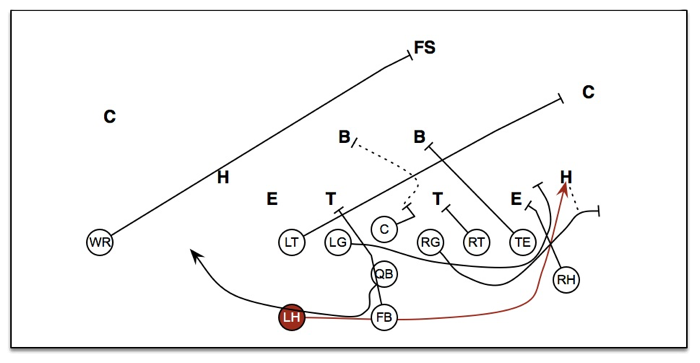 Here are the position by position rules for running Buck Sweep to the TE side:

This play requires a lot of repetitions to get the timing and execution down right. But once you’ve got it, it is the most devastating running play in football! I’ve heard coaches say “it’s too expensive.” But I say: the reward is too great not to invest the time it requires to make it work!!!

When first installing 121/929, it’s best to do it “whole-part-whole”. Introduce it as a team and walk through each position and show them their responsibility.

The next step is to “bird dog” it with all 11 players. Snap the ball; take your 1st step and “freeze!” Coaches check everyone’s step and correct as necessary.

Then walk through it as a team… and I mean “walk”! Just like a slow motion video being shown. In fact, you can yell “pause!” And have everyone freeze. If you’d like, you can say “reverse!” And have them walk backwards from whence they came… just as if they were players on the screen running a play backwards as the coach rewinds the tape! The kids love this and it shows them that their path is important.

When you go “parts”, the line and TE go with the line coach and the backs and SEs go with the back coach. The line runs “Buck Sweep drill” just as it’s diagrammed in Tubby Raymond’s and/or Denny Creehan’s books and videos.

Give as many different examples that you can come up with so that the players must interpret their rules and they are not surprised when they go live and the defense isn’t holding bags anymore!!!

Fullbacks – Put the 2nd fullback on defense with a bag. Tell him to come through the a gap to force the fullback running the play to get a block on him. Be sure the block is with the backside shoulder so the defender is to the outside. Switch up after running the play so all the FB’s have a chance to be the defensive man.

Wingbacks – Same principle… put the 2nd wing on defense holding a bag. Give the wing on offense different looks as to how he needs to block the first free man to his inside. Don’t make it easy on him! This is a key block and you need to be sure that your wing is not hesitating when he starts down.

Halfbacks – Put the next 2 HBs at guards! Make them run the guards’ steps and block the correct man. Your HB’s need these guys there so they are learning to watch the guard’s as they are crossing the formation. As the b-s guard turns up into the “tunnel” the HB wants to plant and cut up right behind him. Set a towel or bag on the ground where you want him to make the 90-degree cut into the tunnel. Do not let him “bounce” outside!

Quarterbacks -. Watch his steps to be sure he’s on the midline. Be sure there’s a good mesh with the HB and that the QB sinks the ball deep in the HB’s pocket. Have your 2nd QB outside the HB. As the play starts, he fakes to an imaginary HB and starts his waggle path. He then throws to the SE/WR on the called pattern. Be sure that the QB running the play carries his fake out all the way to the line of scrimmage outside the tackle box! Don’t let him be lazy! All fakes are important.

Split Ends – Set up a big blocking dummy in center field and make him sprint to get in front of it and then knock it down. Later, if you want, you can put an extra SE in center field With a shield and make the SE have to “work” a little to get cut off position. The 2nd SE in line will be the one catching the pass from the 2nd QB throwing the ball. They rotate from receiver to blocker to free safety and back to the end of the line.

This is also an effective play and needs to be considered to be just as important as Buck Sweep to the TE flank. If teams start over-shifting their defense to the TE flank (and you still want to run Buck Sweep), then you need a way to attack away from their strength. There are only a few minor adjustments that have to be made when running this play to the SE/WR flank:

Our first team drill that we use to execute the Buck Sweep is a controlled drill using blocking bags and shields. We also set up our alignment spacers or “tubby sticks” so that our linemen “see” their splits and get properly aligned back off the ball and away from the adjacent lineman. Our o line coach stands on the line of scrimmage and is evaluating alignment before every play starts.

We call this period “Buck Sweep drill” but it is more acurately a “perfect play” period. Every assignment must be executed as perfectly as you want it to be. Every player must stay on his block till the whistle blows. Every player must hustle back across the line of scrimmage or… the team runs the play again. And again! And again! Until it is executed to the coach’s satisfaction.

Coaches don’t have to scream and yell… just simply tell them: “no good. The wingback stopped driving the bag he was blocking before the whistle blew. Do it again.”

Once the first play is run correctly, the 1st team gets to run the same play to the other side; i.e., Buck Sweep to the right / TE side, then back to the left / SE side.

The 2nd team only gets one play to execute “perfectly.” It is up to the coaches to decide how picky they want to be with the second unit.

Just keep shotgunning units out of the huddle and really keep a racehorse pace to this drill. We do this drill every week on Tuesdays which is our “Big O” day of practice.

The only way to evaluate how well you are executing the Buck Sweep is to run it live in team time. We go live in pre-season but always tell our scout defense to tackle our backs high. We also blow a quick whistle. Once we are in the regular season practices, our scout defense wears forearm blocking sleeves to absorb some of the blow. They are told to come hard and try to make the offense miss! We want it as tough as we can get it on tuesday without turning it into a full scale scrimmage.

In our first pre-season scrimmage, our goal is to run Buck Sweep at least 12 times. We want to get as in-depth a look at this play as we can.

A coach that I conducted a clinic for emailed me recently to say that they broke a Buck Sweep for 91 yards last game and… though everyone was in the right place, very few blocks were made. The RB made a nice cut-back coming out of the tunnel and went the distance. He was flabbergasted that a play could have so few people blocking on it and still break! My response to him was that i’ve seen it happen dozens of times over the years… where we only got one or two decent blocks, yet the back made a good cut and broke it! The reason is that the rb has seen it so many times in practice that he knows when and where to make that cut! It’s why it is so important to practice it a dozen times each week. Once your kids get it down, change up the defense so they are always interpreting their rules.